I love finding stuff that is as cool today as it was when kids liked it years ago. In fact, they say if you wait long enough, everything comes back into style.
On a recent flea market outing, I picked up a Marvel AVENGERS issue # 190. Why is this cool, you ask ? Well, with the recent movie and a sure bet another one coming out, The Avengers is as popular today as it was in 1979.
Many issues are collected for the first appearence of a character. This issue debuts a lesser known villain named June Jitsu who battles Spider-Man in a half page ad for HOSTESS Twinkies.
The cover and interior pencils were done by legendary comic artist - JOHN BYRNE. As for the cover it features a line up that includes Iron Man, Captain America, Beast, Vision, Dare Devil and Ms. Marvel. 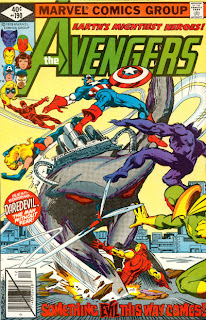 The story inside also contains Thor, Wasp and Falcon. Needless to say, its chocked full of super characters - all which you could have had for 40 cents !
However, it was the find in the rest of the box that thrilled me. I was able to pick out 6 issues of "The Savage Sword of CONAN" from the piles. I left several behind only because they were missing their covers.
And in the 1970's as it was, cover fantasy art was king. I couldn't resist issue # 4, from 1975, with this great Boris Vallejo painting. 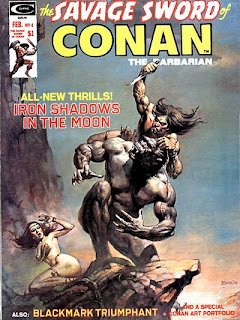 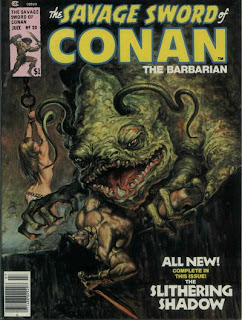 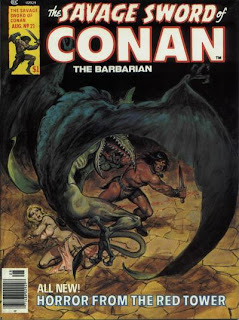 with interior pencils by John Buscema. 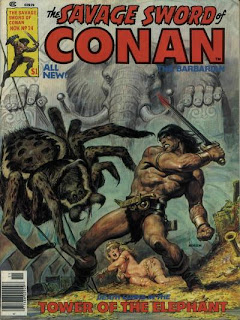 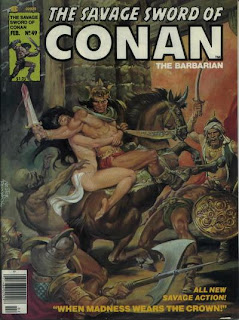 and the famed Joe Jusko. 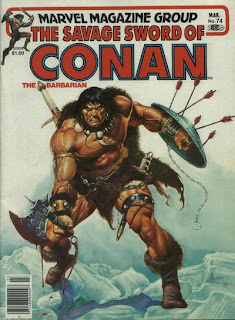 The popularity of this title was due partly that they were sold as a "magazine" rather than a comic book. Thereby, they could circumvent the strict comic book code of the time. This allowed the artists to show a bit of more graphic action and what might have been considered titillation art (i.e. topless women).
This was evidenced by the pin-up pages that accompanied each issue (see example below). 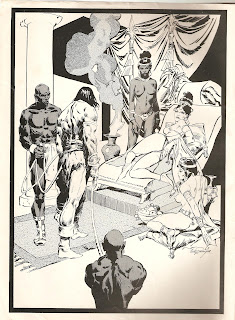 The Savage Sword run was a great success and featured many of the best comic and fantasy artists. One such artist was Pablo Marcos, whom I had the pleasure of working with and doing several comic shows. 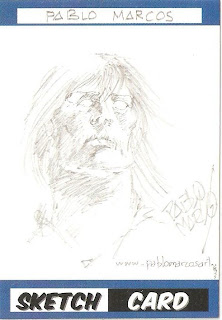 This is one of the sketch cards Pablo did for me. Recognize the steely stare of this dude ?
All this is leads me to why I've been a bit slack on writing this blog. I had been preparing for an upcoming comic book convention. That's right, I'm back on tour !
I'll have pictures and stories of comic cons - coming soon !

Posted by Chuck's Used Cards at 5:59 AM No comments:

Check out fellow blogger - CHRONICLES OF FUJI - for an interesting contest.  He's a solid collector but also a very generous dude. 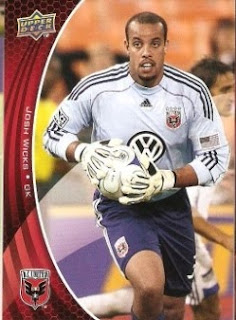 Here is my candidate - JOSH WICKS - who basically ended his career in MLS on one bone headed play.

After being scored on by Seattle, DC United keeper Wicks stomps on the Sounders' Freddy Montero (right on the stones !).


He has since been banished to soccer in Siberia (well actually Norway) but see if he's cooled off in this winter wonderland - NOT. He is sent off for head-butting an opponent after being scored on.