TOPPS has got a winner on its hands. The US National Team's CONCACAF GOLD CUP victory put a spotlight on MAJOR LEAGUE SOCCER. With a majority of the European based Americans taking a summer break, USA Manager Jurgen Klinsmann opted to use a domestic league "B side".
Topps' 2013 MLS card set is loaded with variations of cards that feature Gold Cup Champions -
A late call up, Sporting KC's MATT Besler was tough on defense. 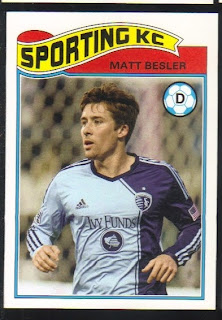 Chicago's goalkeeper SEAN JOHNSON recorded a clean sheet in his one chance between the posts. 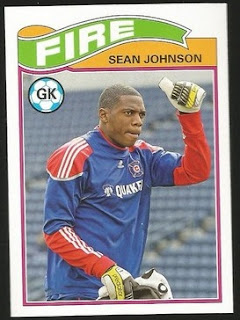 EDDIE JOHNSON scored 14 seconds after coming on as a sub. He also scored in the semi-final. 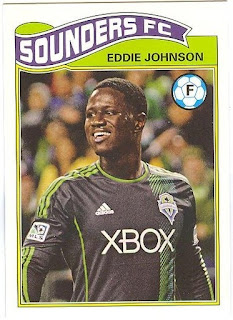 GRAHAM ZUSI was seen as the successor to Landon Donovan. 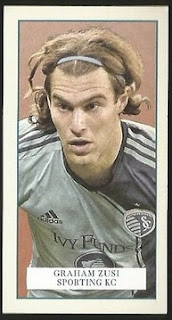 LANDON DONOVAN erased all rumors of his demise. His 5 goals netted him of the Golden Boot as top scorer (tied with 2 others) and the Golden Ball as tournament MVP. 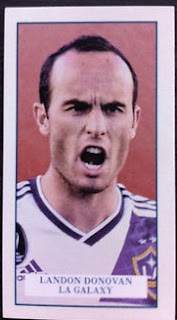 Once forgotten midfield enforcer, KYLE BECKERMAN was a surprise to everyone except maybe Klinsmann. 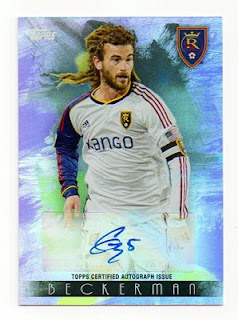 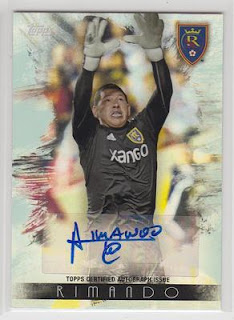 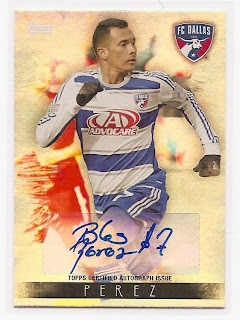 Top scorer in MLS over the past 2 seasons, CHRIS WONDOLOWSKI came to play. Wearing and extra "W" on his jersey nameplate, the error resulted in a hattrick against Belize.  He tied for the Golden Boot with 5 goals. 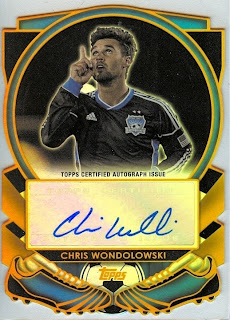 Other MLS players who fared well were Marvin Chavez and Clarence Goodson of the San Jose Earthquakes, and Alvaro Saborio of Real Salt Lake.
The Gold Cup has come a long way and is a showcase for many of the regions best players. It might be time for PANINI to step up and do a sticker set for the next tournament.

Continuing the summery of the 3-day ACC7 show, I finally had a chance to photograph the STAR WARS give-away trading cards from SQUAD 7 (of the 501st). Each member has his or her own card. Some, like Gina's are signed. Gina was great in giving me info on Star Wars toys which I picked up at the show. They know their universe. 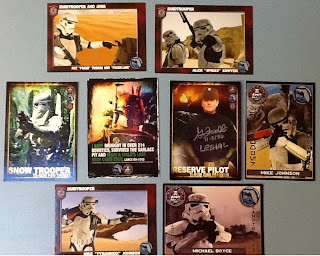 In honor of Squad 7, I was commissioned to do a pin up poster - penciled and inked - of General Grievous. 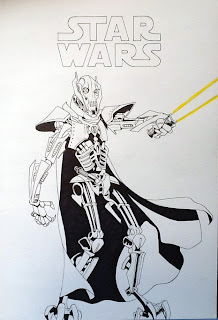 There were a few dealers from Japan with anime statues and toys. They were expensive. Here, a Ninja stands guard over the tables. 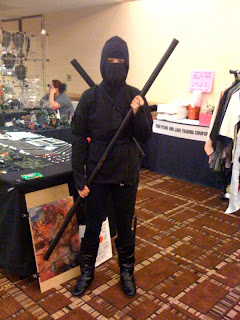 Below, a trio of gals are costumed up for the day. 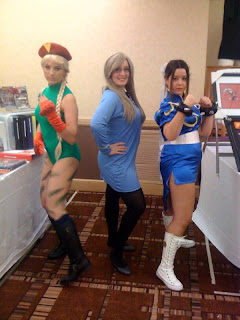 There were other rooms for gaming which I only had a chance to see on the last day. But the stuff was very detailed and looked pretty cool. I don't play, but would love to make some of the props. 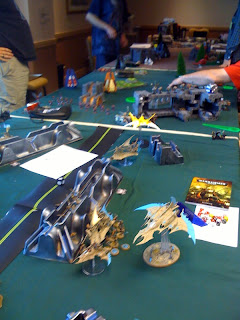 I also did a commission of a WAR HAMMER orc figure. One of the few I was able to get a picture of before the buyer pick them up. 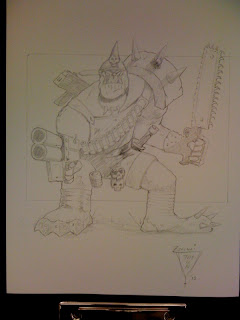 I do a 2-day comic book show in Jacksonville tomorrow. Finding time to finish the art work and blog is a hard task. Thanks for reading.

So Ancient City Con 7 came and went. Three days of furry costumes, steampunk and assorted cosplay. There were some talented artists on hand. One in particular, SAVY LIM, had this colored print of Logan (aka WOLVERINE). 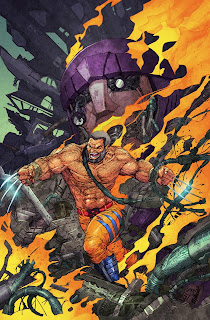 I was fortunate enough to beg and finally trade art for the original art - which is just mind bogglingly detailed. (just look at the hair from the torso !) 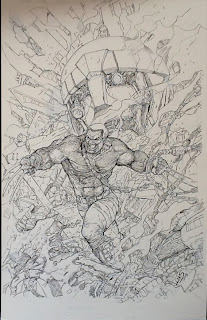 Sometimes pictures do not justice to the visual effect when you see the costumes. This guy's eyes lit up (literally) in stealth mode. 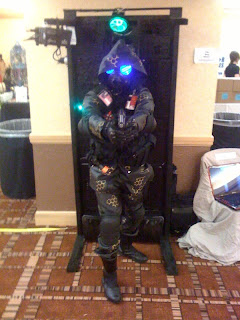 This regal couple (Mr. and Mrs. Steampunk) were part of the steampunk movement - and theme to this show. 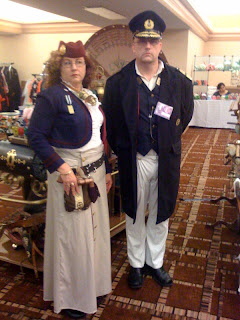 Here are examples of some of the great craftmanship of steampunk costumes and accessories. 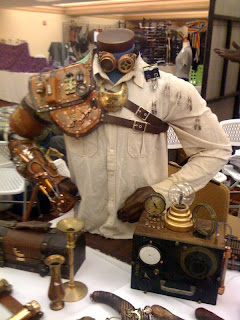 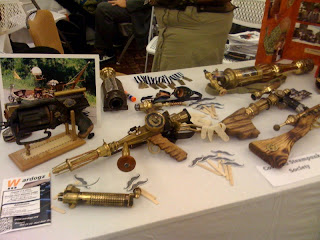 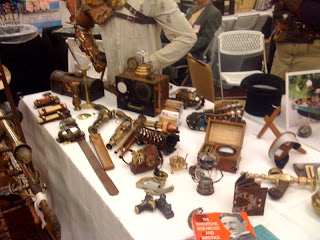 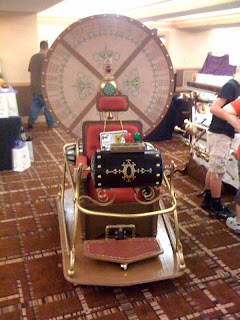 Members of the 501st Legion, Squad 7 - from Jacksonville, were on hand. A nice bunch who gave out STAR WARS stickers and personal cards of their characters. 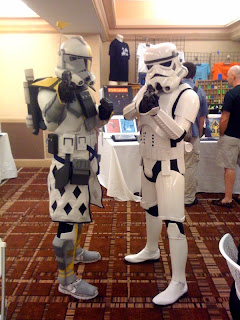 I did a good bunch of convention sketches - but only got to take a few photos of them. Here is "Zombie Wolverine". 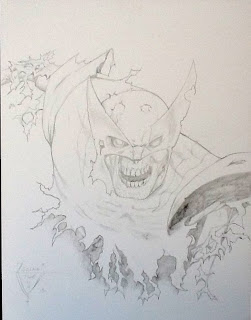 Posted by Chuck's Used Cards at 6:15 AM No comments:

After what was one of the best "mini" pre-World Cup tournaments - i.e. The confederations Cup, a few stars reaffirmed their status:
Italy's goalkeeper - "GIGI" BUFFON had the combined smile and determination to bring Italy 3rd Place. Saving 3 pk's in the overtime did nothing to add to his legendary image. 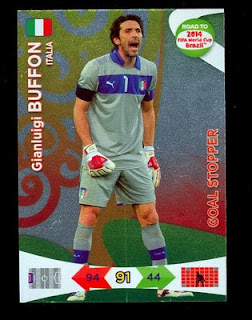 A recent move (or is it ?) to Chelsea put Serie A top goalscorer EDINSON CAVANI farther into the spotlight.  But his free kicks and stealth play over-shadowed teammates Suarez and Forlan. 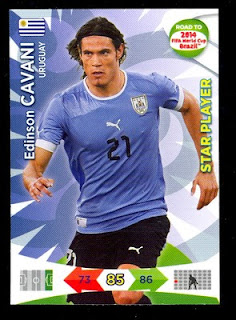 For all his flopping and faking, NEYMAR did produce goals for Brazil. His move to Europe will be a measuring stick to success. 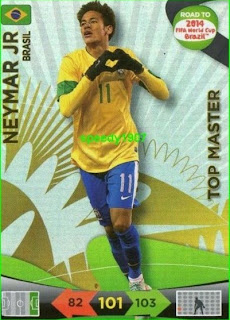 Although they were totally out of their league - I give Tahiti National Team credit for sportsmanship and effort. It was a refreshing to see players without egos and playing purely for the love of the game.
I can't wait for next year's World Cup. But we are only a month away from the European season.
Yeah !

Posted by Chuck's Used Cards at 6:43 AM No comments: