My Kind of Greeting Cards ...

One of my pet peeves is waste. Wasted time, wasted money and wasted materials. So when it comes to greeting cards - well, I'm one of those who will save a tree or save you $3.00 or whatever they cost these days.
Don't get me wrong, I understand the sentiment of Birthday, Father's Day and Christmas wishes. But for me personally, send me a collectable card !
So my holiday greetings - from people who know me - came in the form of a 2009 SPORTKINGS limited autograph / jersey card (below) of ... 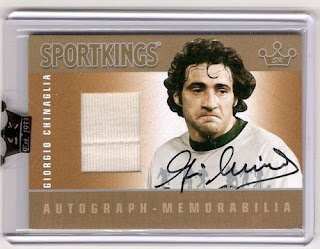 the New York Cosmos legend - GIORGIO CHINAGLIA. I can now add this to my collection of World Cup player autographs. Giorgio appeared in the 1974 World Cup held in Germany. He was a star for Lazio in Italy before making the move to the NASL and joining Pele in New York. 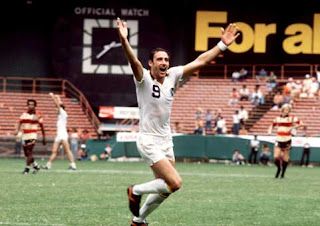 Also making it into my stocking is this card (below) from the 1902 Ogden's Cigarette series. It features another international player who starred over 100 years before Chinaglia. JOHN ROBERTSON made 16 appearences for Scotland and played over 100 games for the Rangers F.C. dynasty around the turn of the century. 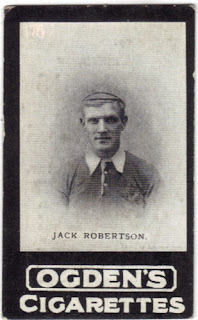 One of his claims to fame is that he was the very first Manager of the then newly formed club CHELSEA F.C..
Two cards, made over 100 years apart, in different parts of the world - still mean one thing - HAPPY HOLIDAYS !
Posted by Chuck's Used Cards at 6:03 PM

HAD OPPORTUNITY TO SEE GIORGIO CHINAGLIA BOTH LIVE AND ON TV A GREAT NUMBER OF TIMES FROM THE LATE 1960s AND CAN STATE HE WAS MOST DEFINITELY THE GREATEST SOCCER PLAYER EVER TO COME FROM ITALY ...

TRULY A MASTERPIECE OF AN AUTOGRAPH ...

IN LATER LIFE HE USUALLY SIGNED AS PER EXAMPLE YOU HAVE SHOWN ...

He was a premier Italian-born football striker, from Carrara, Italy, who scored well over 400 goals during his professional soccer career.

He grew up and played his early football in Cardiff, Wales, then began his career with Swansea Town in 1964.

He later returned to Italy to play for Massese, Internapoli and S.S. Lazio in 1969.

He played international football for Italy, including two appearances at the 1974 FIFA World Cup.

Known as ' Long John ', he was best remembered for his superlative play with the New York Cosmos in the North American Soccer League, which also featured two other greats of the game, Pelé and Franz Beckenbauer, on which Chinaglia won four NASL championship titles, then retired in 1983 as their all-time leading scorer with 243 goals in 254 matches !!!

He was later named to the North American Soccer League Hall of Fame.

In late March 2012, GIORGIO CHINAGLIA was admitted to an unnamed hospital in Florida after suffering a heart attack then was succesively released after undergoing surgery.

However, on the morning of Sunday 1 April he succumbed to a second massive heart attack he suffered while at his home. He was one of the real and true greats of the game.