Getting Nostalgic With the 90's - Shiney Magic Merlin 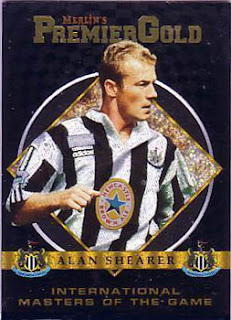 [above - 1996 MERLIN'S International Masters of The Game - Alan Shearer]
After selling off my entire collection of NFL football cards last week, I have become more focused on filling the gaps in my soccer card collection. As much as I enjoyed the other sports cards growing up, I always wanted more soccer material to be produced in the USA. Unfortunately, it never happened. Now, with Upper Deck spitting out their sub-standard product - and  MLS being complacent with it, it looks like nothing much has changed. Thank Buddah for the internet, and cable TV.
Now, I do look at my rebirth into collecting when the wonderful products became available in the 1990's though internet trades - namely, MERLIN'S PREMIER LEAGUE  trading cards. 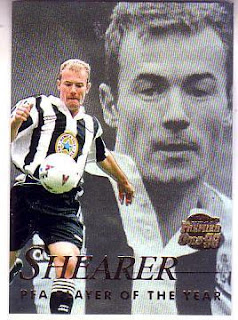 [above- 1998 MERLIN'S Rainbow foil Golden Moment - Alan Shearer]
There are several reasons why these card sets appeal to me. First of all, they were very managable sizes. Most were under 200 cards. Next, they had small and well designed chase cards inserted in the packs. Both the front and the reverse were guilded in shiney color and gloss. But more importantly, they had good information. 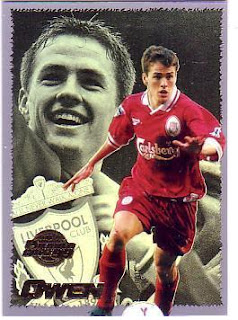 [above - 1999 MERLIN'S Gold - Michael Owen]
Lastly, they were acoompanied by binder books - complete with plastic pages and room for all the base cards and the inserts. The binders featured fantastic photos of the stars and a checklist to track your progress. 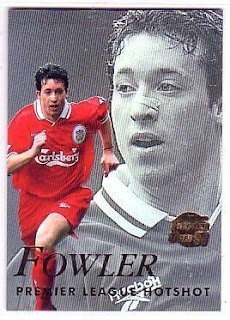 [above - 1998 MERLIN'S Permier League Hotshots - Robbie Fowler]
While the inserts were dominated by Manchester United players, it had a good mix of stars that have stood up with time - Alan Shearer, Robbie Fowler and Micheal Owen - all 100 goal scorers in the Premier League. 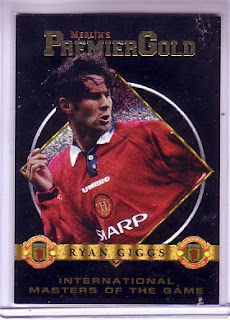 [above - 1996 MERLIN'S International Masters of The Game - Ryan Giggs]
There were a good number of foreign players that were beginning to star in the Premier league on a regular basis. They soon became fan favorites like - Eric Cantona (France), Ruud Gullit Holland), Giunluca Vialli (Italy), Peter Schmeichel (Denmark) and Faustino Asprilla (Colombia).
This was the start to the Premier League evolving into the "World's Best League". Although they are still relatively affordable ($5-10 range), these inserts are becoming increasingly harder to find as global collectors search for super looking super star cards.
Posted by Chuck's Used Cards at 7:59 AM