The debut of modern bubble gum cards featuring soccer (football) began with the 1958-59 A&BC Football Stars of England. As explained elsewhere in this blog, A&BC Gum Ltd. was later purchased by Topps. The card designs are often familiar between the Topps sets especially the various sports issues.
The premier set of 92 cards were issued in 2 series of 46 players each. The second series being uch rarer and seemingly difficult to find. Some are found without the Planet Ltd. advert on top (with dotted line).
I was able to obtain 4 excellent to mint cards for my personal set. It included card # 1 Eddie Baily (below). 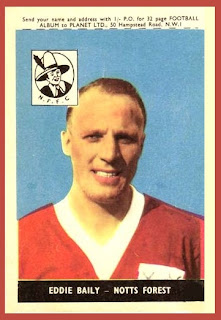 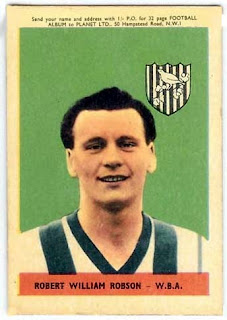 The cards with yellow backgrounds are very appealing to me. This is Arsenal's Derek Tapscott (below).  The background colors are dark blue, light blue, green and yellow. They follow a pattern with the card numbering. For example the first 5 cards have blue backgrounds. The next four have green backdrops. 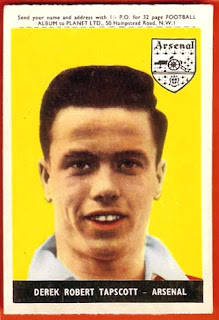 The forth card is one of the up and coming stars of Tottenham Hotspur's Double-winning side - Terry Medwin. 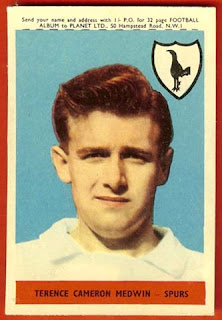 Although these are less favored to me compared to the subsequent year,  the 1959-60 A&BC set, these 1958-59 portrait style and background colors on these are memorable. Much like the 1952 Topps baseball cards, this is a debut set and will stand as a mark for modern soccer card collections.
The challenge, albeit a small set, will be to complete all 92 cards and even harder to find them in pristine condition. I feel fortunate to have added these four to my collection thus far.
Posted by Chuck's Used Cards at 2:28 PM