As the year progresses, I am making headway on my project to collect original cards of the 100 greatest FOOTBALL LEAGUE players. As of today, I have obtained 86 % of the list. The hardest ones to find are the pre-war issues. But I did score on one of late.
HARRY HIBBS
It may seem like a small achievement when looking at Harry Hibbs' trophies, but the former Birmingham goal keeper accomplished more than just an F.A. Cup runners up medal in his career.. 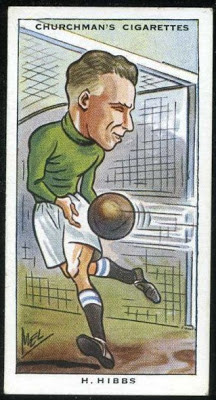 1935 Churchman Cigarettes caricature
In an age when the England National Team selection was done by committee rather than a Manager, Hibbs made an astonishing 25 appearences for his country. On 10 of those occasion he shutout his opponents. 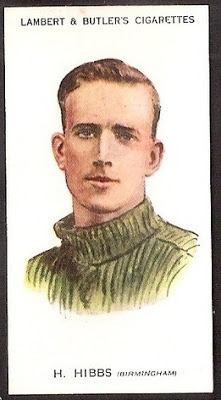 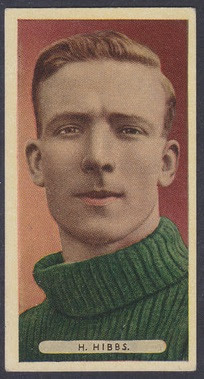 1934 Ardath Cigarettes portrait
This revolving door continued after even after Hibbs last international match (February 1936). The singular mainstay was Vic Woodley, with 19 appearences, until the halt of international football in 1939.
Hugh Turner - 2 caps
Harold Pearson - 1 cap*
Frank Moss - 4 caps
Ted Sager - 4 caps
Henry Holdcroft - 2 caps
George Tweedy - 1 cap
Vic Woodley - 19 caps
Harry Hibbs held the England record for appearences for a goalkeeper until it was broken by Ron Springett in 1962. Harry Hibbs played 358 league games with the club. The club shows its best run in the pre-wars years staying in Division 1 his entire career. During this time, Birmingham reached its only pre-war F.A. Cup Final in 1931.
Posted by Chuck's Used Cards at 11:27 AM