In this second installment of heroes who have scored in the World Cup Final, comes cards from the underrated German BERGMANN FUSSBALL series.
The heart of these early Bundesliga sets is the nucleus of German and Bayern Munich stars. The current German professional league only began in 1963. One of the first card sets was the 1965-66 Bergmann Fussball series.
The cards are on heavier stock and sized very close to modern standard baseball cards. 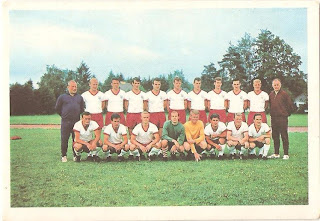 The making of a dynasty - the 1965 Bergmann Bayern Munich Team card.
The set contains mostly player portrait pictures with a few posed action shot. Also included are some excellent team photos (see above). The set marks the cardboard debut of Germany's finest generation in Franz Beckenbauer, Sepp Maier (Bayern) and Berti Vogts (Borussia Munchengladbach).
Another Bayern youngster that would go on to stardom was "Der Bomber" GERD MULLER. 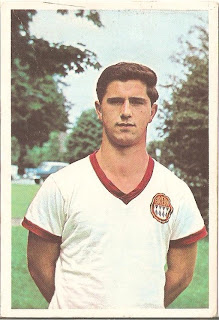 Gerd Muller makes his card debut in the 1965 Bergmann.
Muller would set the world on fire by becoming the top scorer at the Mexico 1970 World Cup - with 10 goals. 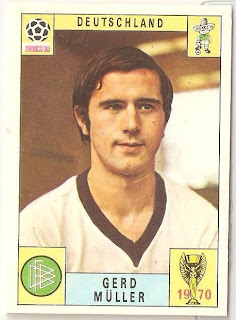 He would amass 68 goals in just 62 appearences for Germany.
He broke all records in European and club scoring with 487 tallies in 555 top division matches.
He scored the winning goal for Germany in the 1974 World Cup Final. 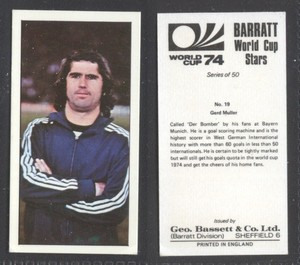 1974 World Cup Star.
Here are some high lights of Der Bomber - complete with "um-pah-pah" music.
The 1970 European Footballer of the Year held nearly every scoring record in the World Cup and European Club play until the Brazilian Ronaldo and the Argentine Lionel Messi's recent successes. 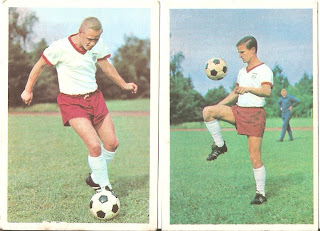 I was able to pick up 4 of these Bergmann cards, all featuring Bayern Munich, for a very small price.
Notes: Last week's entry - PELE' - and this week's candidate - GERD MULLER, both finished their careers in America. Pele with the New York Cosmos, and Muller with the Ft. Lauderdale Strikers. Both clubs currently compete in the USA's 2nd professional division - North American Soccer League.