It looks like World Cup fever is catching up with the soccer card collecting hobby. Several rather hefty prices have been realized for modern cards. Top of that list, in the American market, is still David Beckham. Oh, what a goof the Upper Deck people made when they omitted Beckham from the autographed sets of Major League Soccer cards. 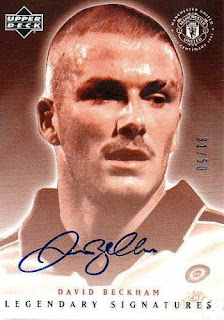 Not to be outdone by the new HEROES - Futera has made a big impact on the hobby with exclusive 1/1 autograph cards. However, the real surprise is the non-autograph cards that are bringing triple digit prices. 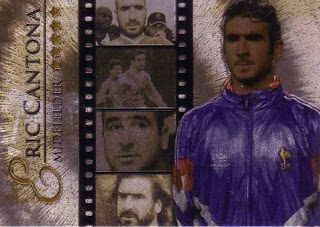 The French superstar Eric Cantona fetched $170.00 for his 2009 LEGEND card (above) while another English World Cup star - Bobby Moore brought $172.50 for his card (below). Moore played briefly in the old NASL during the 1970's and appeared in America with West Ham United when they played in the ISL of the 1960's summer league. 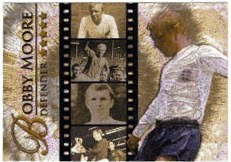 Reports that MLS' 2009 Most Valuable Player - Landon Donovan will go on loan to Everton F.C. for 3 months before the MLS season starts next year. He joins fellow Yankee - Tim Howard with the Liverpool club.

Another former player - ex-Tottenham, Inter and Bayern Munich player, former Germany national team coach - Jurgen Klinsmann (below -1995 Merlin pogs) is returning to the USA. He lived in California for some time. Can we speculate that he will take the New York Red Bull vacant coaching job ? Time will tell ... 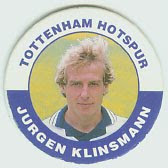 In a wonderful holiday gesture, I was sent this card by a fellow blogger - 2009 Goodwin Champions Alex Ovechkin. I am happy to see other athletes in these sets but also disappointed with the lack of soccer players. The unassuming pose is refreshing in the avalanche of action shots that flood todays' sets. 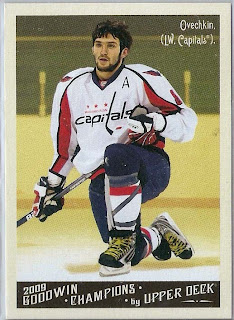