In Pursuit of the Primose and Gardians of the Cage

I have to admit collecting anything that is over 100 years old is very exciting. Thoughts of how many hands and lives such an object must have touched is equally compelling.
When this is combined with my interest in soccer cards - well, the dyno-meter needle goes whacko.
The rivalry of England v Scotland in soccer goes back to 1872. This is best understood by Americans and their heated battles with Mexico in the past few years.
One such match stands out for Scottish fans - the day that Scotland, who traditionally wear dark blue, instead were outfitted in the horse racing colors of of Lord Archibald Primrose. 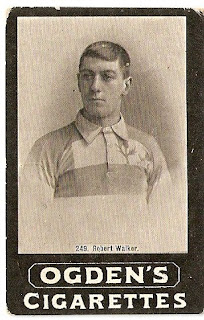 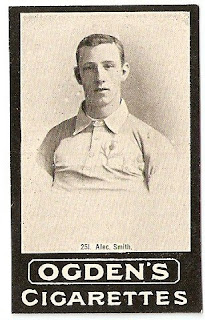 The great victory in 1900 was preserved for all time when Ogden's Cigarettes depicted the Scottish players in the pink and yellow kits after their 4:1 triumph. 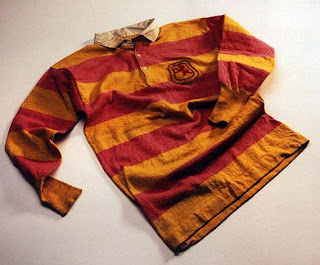 I have been trying to collect all the players from that famed match and have added two of the players - Smith and Walker. Although the 1900 and 1901 Ogdens tobacco series include 10 of the 11 players, I think only 6 appear in the Primrose. I have three so far. 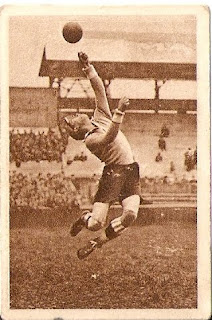 My other persuit is pre-war goalkeepers - having picked up these three gems: Wenz, Jakobs and Schwatzfischer from the 1932 Monopol Cigarette series. 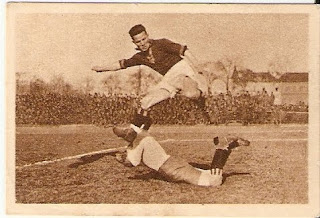 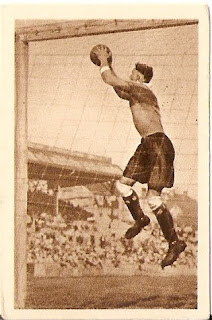 the Wenz and Jakobs are both international players who appeared for German National Team before the War.
These items, if you can find them are still bargains. But I risk competition from my readers now that I have revealed this. But maybe we can trade if you happen to beat me to the punch.
Posted by Chuck's Used Cards at 6:56 AM

I like the last scan especially, very cool card!!!

For the pre-war period, the German photography is exceptional. Even American sports cards of the same era are usually posed or portraits rather than the action shots which appear on these Monopol cards.

Ironically, there was a camera company called Monopol - but not related to the tobacco makers.