With the long history of the Academy Awards (since 1927) there have been many sets that have featured Hollywood's feted actors. There are several excellent British tobacco sets that feature many a great thespians.

But for modern collectors, there are some nice cards that depict Oscar Winning actors. Although very few exhibit the actors in their Oscar role, they are classic performances in some cases.

None is a better example than Sir Alec Guinness immortalizing the character of Obi Wan Kenobi in STAR WARS. 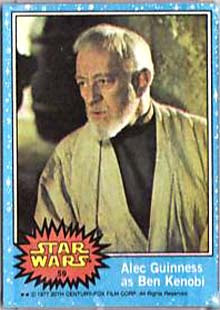 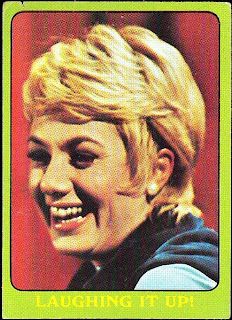 For many autograph collectors, there is a challenging (and expensive) array of Oscar Winners on various autograph cards. some are less flattering such as Charlton Heston in the remake of Planet of The Apes. They are none-the-less valuable as Hollywood signatures and in a few cases, gone for good. 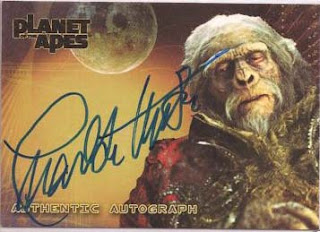 The Batman series of cards have an extraordinary run of famous autographs. Not only does this include California Governor Arnold Schwarzenegger, but a nice handful of Oscar Winners including - Morgan Freeman, Liam Neeson, George Clooney and Micheal Caine. 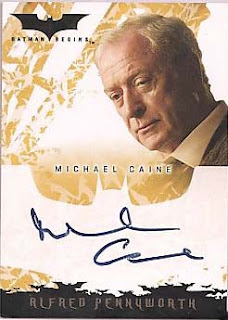 One of the select (that I know of) who appears in more than one autograph set, is Dame Judi Dench. She signed cards in the forgettable able sci-fi movie Riddick - and in the James Bond set as well. 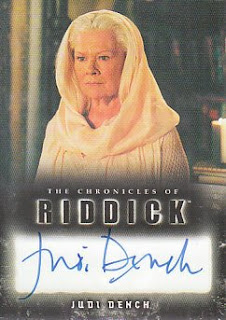 Another classic series that offers a surprisingly strong Oscar Winning alumni is the X-MEN set that includes Halle Berry and Anna Paquin. 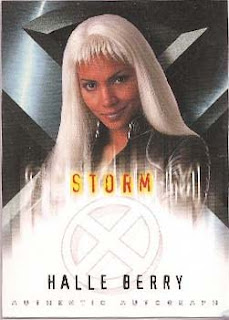 Berry is one of the other actors that have autographs in additional sets - appearing in the James Bond series too. 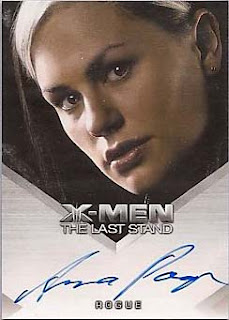 Others worthy of mention are autographs by Angelina Jolie in Tomb Raider and Kim Bassinger in Batman. Non-autograph card appearances of note include Nicole Kidman and Jack Nicholson (Batman), Jessica Lange (King Kong), Sally Field (The Flying Nun) and Gene Hackman (Superman).
Posted by Chuck's Used Cards at 8:33 AM