With all the latest creatures in the 2009 Allen & Ginter set - (legend, myth and terror - subset), there are a few that will hold the test of time. Dinosaurs will last as long as kids and adults have imagination. This beastie - VELOCIRAPTOR is the next best thing to having a T-Rex on a card. 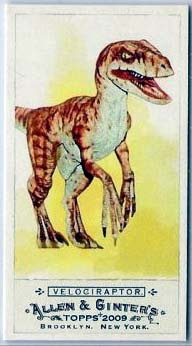 But frankly, the selection of most of the others 2009 subsets are a bit hokie. I prefer the creature that fans still love and villians feared in Hong Kong, China and Hollywood.
Enter the DRAGON - BRUCE LEE ! The 2007 Allen & Ginter card depicts the martial arts master in a scene from the American box office hit - "Enter The Dragon". 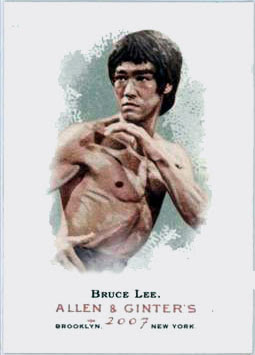 Even one step, kick or chop better - was the mini version of this card - and even best - the black border version. 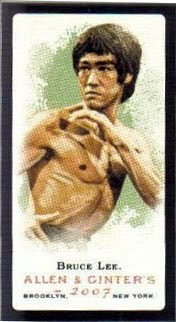 Although classified as a non-sport card (albeit in a baseball dominated set), Bruce was anything but a non-athlete. He proved every bit the physical super star that Hollywood wanted.
So his rookie card, if you will, was in the 1966 Donruss GREEN HORNET set. The TV series ran for a short time but Lee who portrayed "KATO" was very popular. 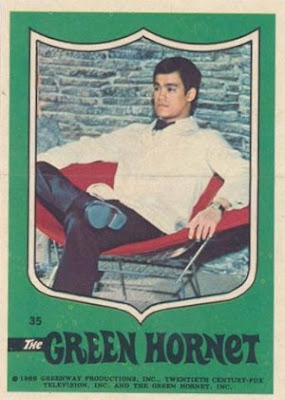 These are some of the cool colorful cards of the 1960's that are worth collecting. 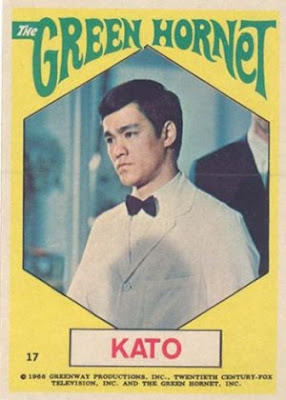 Bruce would have been even a bigger star had he landed the part originally written for him - KUNG FU. 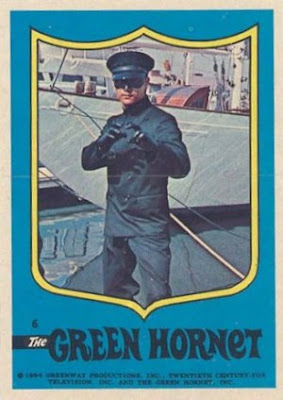 Sadly, mainstream America was not ready for an Asian star. But his sudden death spurned him to immortality. He is preserved on cardboard for all to enjoy.
Posted by Chuck's Used Cards at 7:16 PM