The Summer of Soccer ... in cards

Though a picture is worth a thousand words, no amount of trading cards can sum up what was dubbed "The Summer of Soccer". Crammed into a regular season of Major League Soccer was a summer of 101 tournaments, touring club and exhibitions games in 51 days ! That's 101 games in 51 days - my TV almost burned out.


The U.S. National Team reached the Final of two very exciting and important tournaments -both in two month period - the FIFA Confederations Cup - facing Brazil in the Final, and the Concacaf Gold Cup Final against rivals Mexico.


European based American stars who had just finished their season, first traveled to South Africa where the USA's Tim Howard faced Brazil's Kaka'. Howard immediately returned to the States to join his club team Everton to play the MLS All-Stars. 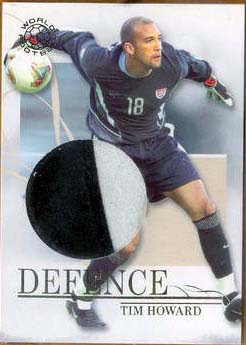 Meanwhile, Italian Champions Inter Milan joined rivals AC Milan and England's Chelsea in a 4 team tournament in 6 American cities. Kaka' did not accompany the Milan team as he was purchased by Real Madrid for a whopping $110 million (56 million pounds).


This was pale in comparison to the Real's next buy a week later when they broke the world record in obtaining Cristiano Ronaldo from Manchester United. The Spanish giants splashed out a $120 million (80 million pounds). 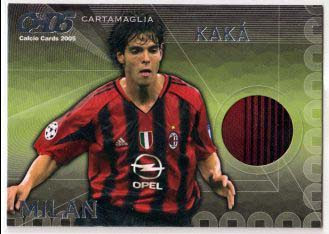 
With Barcelona aving swept the Spanish trophies, it is any wonder that Real were buying the best from around the globe to compete. But it was the World Player of the Year - Lionel Messi that everyone came to see. He did not disappoint - scoring twice against Seattle Sounders before a record crowd of 65,289. 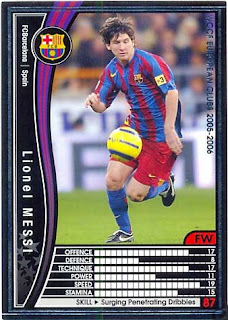 That record was shattered when F.C. Barcelona met the Los Angeles Galaxy in front of 93,137 at the Rose Bowl ! L.A.'s David Beckham stole the show by scoring with one of his trademark freekicks. 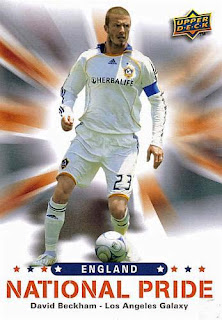 One of the revelations of the summer has been defender Chad Marshall. The 6 foot plus Marshall, who led Columbus Crew to the MLS Cup last season, debuted for the US National Team. This newfound fame sparked bidding wars for this numbered autograph card. (below) While the MLS season is winding up into play-off mode, the European season has launched with the new player signings at the big clubs.
One of the surprises was the $10 million dollar American teenager - Jozy Altidore - to English Premier League club - Hull City. The "Tigers" took the former New Yorker on loan with a possible $11 million dollar permanent move. Only time will tell if his 2008 Upper Deck rookie card (below) will be in demand. 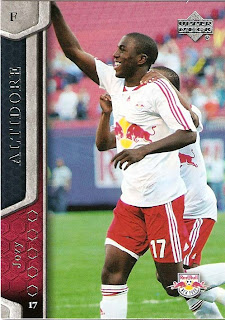 The "good news - bad news" is that between the American soccer and European football season - the sport never ends. And for collectors, it means a constant stream of new product. This means having to budget, shop and choose carefully.