Stories of old cigarette cards found in the attic usually get collector's hair standing on end - or at least some attention. Recently, A discovery of rare 1934 soccer cards made in the former Czechoslovakia were found in Canada. 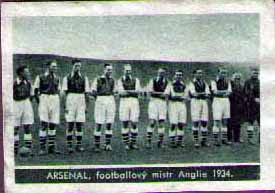 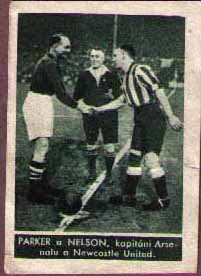 The club had earned a great reputation throughout Europe and toured in Spain, France and Central Europe. One card features a game against Racing Club Paris. (Arsenal-Racing List here) This contest against the French team was in benefit of war invalids. The record of matches which started in 1930 continued annually until the 1960's (except the war years). 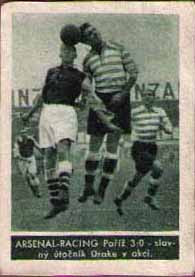 Although I can find no record of the club, Arsenal played a match against Rokousko - who I assume is a Czech club. However, all that was prior to the Second World War and may not exist any longer. 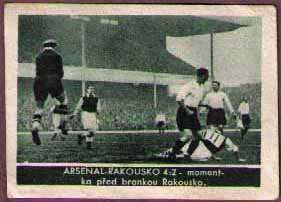 It is great to find such priceless collectables and hope more will turn up in the future.
Posted by Chuck's Used Cards at 5:24 PM