I have always been fascinated by the idea of tobacco cards. Having grown up in the age of bubble gum trading cards, I guess I wonder about those the same way today's kids think about modern cards. Today's packs are sold without any additional product. This is quite different from the era when cards were just the byproduct of the item to be sold.
I had the chance to get this complete cigarette box of "TURF" sliders. They were named as such because you could slide open the box to retrieve the cigarettes. 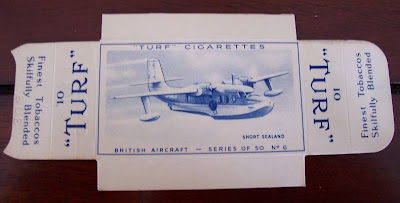 The 1953 "TURF" Cigarettes series of 50 British Aircraft were meant to be cut out after the box was empty. These can sometimes be found through online auctions. I found this one for .99 cents and free shipping.
My garage sale bargain was this complete set of Top Trumphs 2009 STAR WARS: Clone Wars card game.
Tops Trumphs is a British manufactorer that has produced these card games since the 1970's. 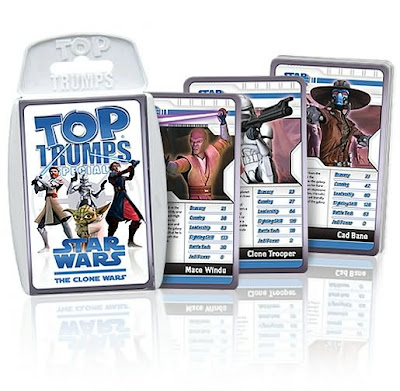 The range of subjects run from entertainment and sports to science and history. They are well known around the world and you can visit their web site Planet Tops Trumphs here. My cost - .25 cents.
Posted by Chuck's Used Cards at 4:21 PM

Anonymous said...
This comment has been removed by a blog administrator.
February 1, 2010 at 7:12 PM