Today, Manchester City has a payroll well into the millions. There are plenty of foreigners on the English squad including two Argentinean players. Argentina, once an enemy combatant of England, are now expensive imported stars at City.

But it was not like that in the 1940's after the end of World War II. The ruins of Maine Road, Manchester's one time stadium, had to be abandoned due to an unexploded German bombs on the pitch.

Yet by 1949, a German man who was once a sworn enemy of England, took his place between the goal posts at Maine Road.

BERNHARD TRAUTMANN was a Nazi Paratrooper captured by the British and incarcerated in a camp inside England. He never left. 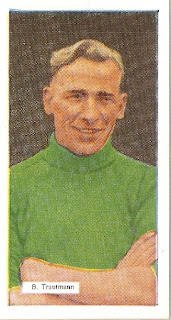 According to the story, the Brits called him "BERT" as Bernhard was not something they could not or would not pronounce.

Bert took up farming in the small town of St. Helens and soon attracted the attention of 1st Division Manchester City while playing for the local club team.  Perseverance in the face of hate and animosity left over from the war, eventually became admiration and later adulation.

Trautmann went on to be voted "Player of the Year" in 1956 - the first goalkeeper to do so.  His legend was sealed when it was learned that he played the remainder of the 1956 F.A. Cup Final with a broken neck after a collision with an opposing player.

Bert played over 550 matches for Manchester in all competitions.

In 2004 he was awarded an honorary Order of the British Empire (OBE).

The day he broke his neck, he was worried a sniper was on the field! "Supporting Tottenham Hotspur"

Not true, not true. We know you support Blackburn Rovers. They could use a sniper right now.