Modern card collectors who chase jersey cards have lots and lots of choices. While other American sports cards have tons of jersey swatches - from the greatest players to the modern rookies.

Soccer cards, which are evolving with these modern "chase cards", do not have such luxuries - yet.

Other than the Pele' swatches from SportsKings, there are few legendary artifacts in the market.
To make matter worse for North American collectors, Upper Deck - possibly the worse cards ever for modern soccer (ugly, overpriced and farcical in other ways), cannot manage to match their photos with swatches. 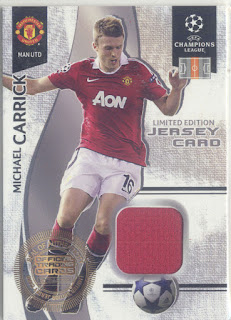 Panini, the masters in soccer collecting since the 1960's, has meanwhile done an effective job at producing jersey cards. Their 2011 Champions League subset included 5 players with varying swatches (as many as 3 different colors).

True card makers know that these jersey cards are base on availability, not like the NFL which hands out jersey samples with photo sessions among their "game-used" material.

These Panini examples are matching to the colors of the jersey depicted on the card. Unlike the Upper Deck MLS which you may as well guess the team or the year that the material. The Thiago Silva card (above) even has the stitches to the two-color pattern.

This Frank Lampard jersey patch is sublime with the soccer balls outlining the crest. Some of these cards were known to have included an autograph as well. The above Lampard card sold for $400 on ebay.

Still drooling for that Lampard...but 400 bucks is steep!