Keeping Up With The JONES ... Vinny JONES

Playing football can be a hard life. Or if you're VINNY JONES, make life hard - for other players. 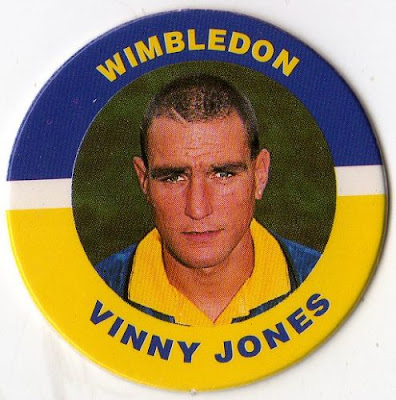 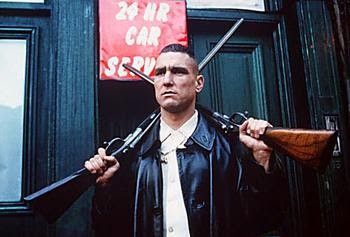 Jones has had a succession of work playing the murderous, the silent and the deranged. In this ELEMENTARY episode he hangs his victims upside down and slits their throats while watching "THE ARSENAL" on the TV. Not to be interupted, even by the call girl trying to seduce him while the game is on. 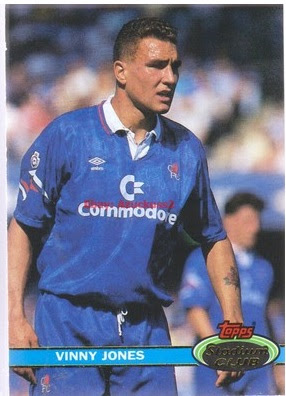 1992 Topps Stadium Club
Vinny played for several London clubs including Chelsea and Wimbledon (with which he won the F.A. Cup). But he never played for Arsenal.
Comic fanboys will forever have this image (see below) of the X-MEN villain JUGGERNAUT. He looks like he could really go through a wall ! Chances are Vinny will never play the role of the quiet and sensative leading man. But he is still appearing on trading cards as seen in Rittenhouse' X-MEN 3: The Last Stand. 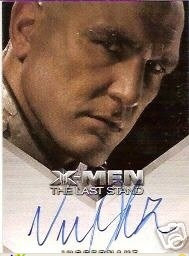 While he will not win points for his penmenship, the glare on this autographed card is priceless - and probably included with his audition photos.
See if you can figure out what Mr. Jones is selling in this advert : 1996 Pro Match carature.
Vinny Jones is a great character and worth watching whether he was on the playing field or on the big screen.
Nice one Vinny. Now cut the man down.
Posted by Chuck's Used Cards at 9:44 AM

always enjoyed him. Loved Elementary. First thing I saw him in was Gone in 60 Seconds with Nic Cage and Angelina Jolie.
He was pretty cool then too...

I had those pogs!

Loved him as "Big Chris" in Lock, Stock and Two Smoking Barrels".