After a long holiday break and the massive computer breakdown, I have been able to resume my quest for a card of every player selected in the Football League top 100. Through some unusual circumstances I was able to add another card to my collection by way of super collector Alan Zimmerman.
If not for Dixie Dean's 60 goal season of 1927-28, it may well be GEORGE CAMSELL who holds that record.
So impressive was the youngster's feat of 59 goals in 1927 that GALLAHER CIGARETTES (see below) included an individual card in their set of action cards. The 1927 Gallaher's consisted of 50 cards of colored match photos except for the young Camsell. 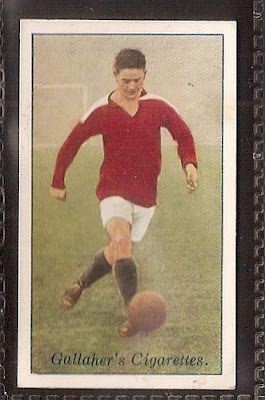 Card # 37 of the 1927 Gallaher Cigarettes - Footballers in Action
He was included in the subsequent set with his own portrait shot - Gallaher's Famous Footballers. 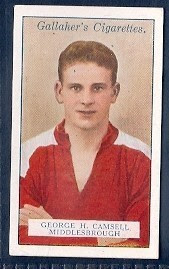 1928 Gallaher's Cigarettes - Famous Footballers
George Camsell stands as the 5th all-time goal scorer (325 goals) in English Football. He scored 345 goals in  453 matches in total for Middlesbrough. His career, like many, was cut short by the Second World War - curtailing his already massive goal haul.
Hi international scoring rate was even more impressive with 18 tallies in only 9 appearences for England.
He is our number # 17 on the Football League top 100 players.
Posted by Chuck's Used Cards at 11:19 AM