If you follow this blog, then you are well aware that I relish cardboard with Indians - or what is accepted as Native Americans.

I also love the fastest team sport on ice - hockey. So when you get a chance to combine the two ... 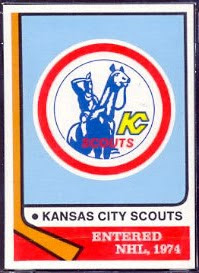 it should be something special. Well ... not always, but when the NHL announced in 1972 that Kansas City would get a franchise - they went with the Western theme of an indian. Much like the history of our Native Americans, it did not work out so well. 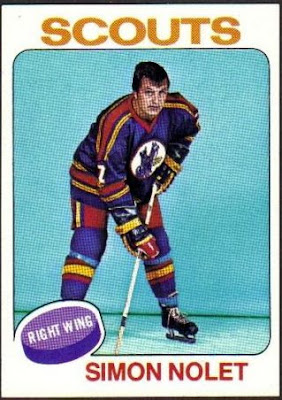 That didn't start out so well either, but has progressed to some great success.

The club was originally to be called the Mohawks, but protest by the Chicago Blackhawks franchise prompted the change to Scouts - named after the Kansas City Scout statue that overlooks the Missouri city.

So while it could have been a better indian logo, it is a tribute to the concrete Native.
Posted by Chuck's Used Cards at 8:57 AM

Are you feeling better?

Was it THE flu?

Cool. I hadn't heard of the KC Scouts. I thought they were always the Rockies before moving to New Jersey.

I am better thanks Dinged Cards ...

it is an interesting path to follow almost all our major sports teams from Boston, New York, Chicago and St. Louis.

Why do Americans always call hockey "Ice Hockey". There is only one kind. BTW, there are some other defunct teams, like Cleveland Barons, Minnesota North Stars, California Golden Seals etc...