For Club and Country ... The Ultimate Sacrifice

He was not the first, he probably will not be the last - Nodar Kumaritashvili, from the Republic of Georgia, died from his injuries at the Olympics yesterday.
Making a practice run on what is being described as the fastest track in the world, Nodar lost control of his luge sled and crashed into a pillar. 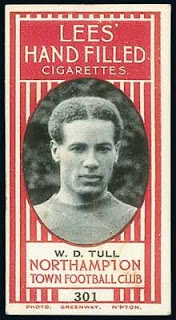 He appears on the very scarce 1912 Lees' Cigarettes  card (above). When the First World War erupted in 1914 he joined the army and was one of the first blacks to serve.

However, what separated him from every soldier aftrwards was that he was admitted to officer training school at a time when it was specifically prohibited by law to allow persons of color as officers in the British military. He became the very first black officer reaching the commissioned rank of Second Lieutenant.

He saw combat in France and Italy and was commended for his coolness and gallantry. After almost four years of war, he was shot and killed instantly in battle so heavy that his body was never recovered.

All accounts report that he was a talented footballer who may have been purchased by Glasgow Rangers after the war. His legacy has been recounted in books and in film.