The fascinating thing with card collecting is the appreciation of players who performed before we were around to see them. Personalities from Babe Ruth to Jack Dempsey are ones we've only read about or saw some grainy film footage or pictures.
My first collectible featuring "Dixie" Dean was a 1985 Panini sticker from its "Stars of the Past" subset. 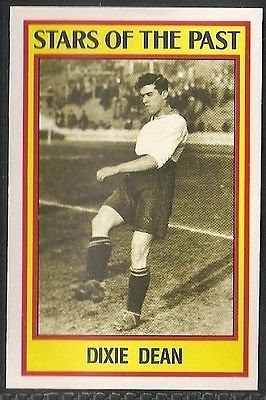 1985 Panini Dixie Dean
Dean appears on over 40 cards during his playing days (1923-1939). Of those, almost half are illustrated in painted portraits or caricatures.
I added two cards to my PC of Dixie - both of which are art work on cardboard. In addition, both are issued on John Player & Sons cigarette cards.

1927 Player's by "MAC" - Dixie Dean
Three consecutive years, Player's cigarette cards featured English soccer stars. Starting with illustrations by "RIP" in 1926 and followed up with art by "MAC", and the 1928-29 set of footballers. 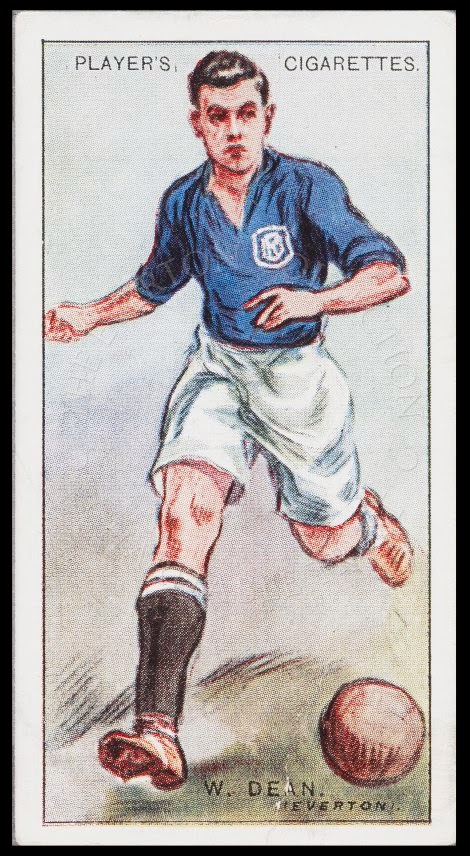 1928-29 Player's Footballers - Dixie Dean
Dean was a consummate super star especially after his record breaking goals in the 1927-28 season. With 60 league goals and 3 more in the FA Cup, only 2 other players have approached these numbers in tops league. (Argentina's Lionel Messi and the USA's Archie Stark)

His international scoring, albeit short, was a remarkable 18 tallies in 16 appearances.  His last cards, issued just before the Second World War, was issued in Germany and South Africa. Both are quite rare and bring high prices.

William "Dixie" Dean is a must have for any soccer collection. Many of his cards are still extremely affordable.
Posted by Chuck's Used Cards at 12:20 PM