One of the catalysts that launched me into writing a blog was the opportunity to trade cards again. Some of my fondest memories are from grade school when we snuck every chance to open our desk and slide that card over to your buddy for the one you've been drooling for since lunch.

I sent my want list over to Steve at White Sox Cards. I guess this blog and all its trimmings has a learning curve. It's my fault, not Steve's, for not being more specific when I sent the list. When I said old stuff, I should really know that to guys in their twenties or thirties, old is still Topps cards from the 80's.

I should have also added that I have everything from 1978 to 1988. Well, everything I want. He sent me lots of Sox - red ones - all which I had. I got a kick out of this 1990 Score card that features Boston's winning streak. The front shows a fat-bellied Manager John MacNamera -who's firing led to the beginning of the winning. The back is better with Boggs and Co. high-fiving. A sign of the times. 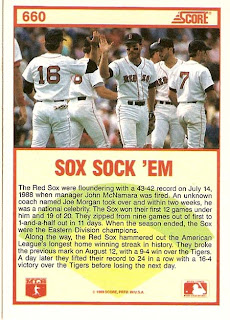 What Steve could not have know is my fascination with the Dark Knight - BATMAN. I like it when traders add a twist. BATMAN is twisted. 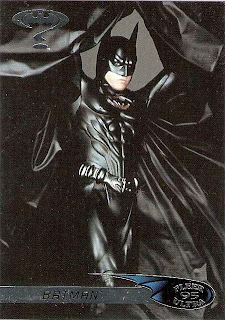 Lastly, Steve included a bit of his own interests ... and mine. Presidential cards. Ah, history.
Although I'm not over the moon about the design or the fact that their old .. er, first Lady is on the card, they are albiet informative. I prefer the Goudey Presidents. Thanks Steve. The next batch will have starch !

I'm glad there was something of interest in there. :-)