I love to fly. I like airports. In all my years of covering sports I enjoyed the pampering we got on airlines. But I only flew in a commercial propeller airline once - and it was a roller coaster ride.

I cannot even imagine what it must have been like for the pro athletes before the advent of luxury jet liners. Maybe they were like these aircrafts from the Godfrey Phillips Cigarette series.

I remember the incident from the 1994 World Cup - the Dutch National Team had advanced to the next round and were leaving Orlando, Florida to fly to Dallas. Before Holland's best were to face Brazil, they had a bigger scare. A reporter following the team had made a joke about a bomb - which resulted in the plane being emptied on to the tarmac and delayed indefinately.

One player that was effected for life was AJAX star forward - Dennis Bergkamp. Bergkamp, who would go on to play for ARSENAL . F.C., would make one more flight back to Holland and never fly again. This player who keep his cool in the box would never return to the USA. I now cherish the photos and conversations I had with this much admired superstar. 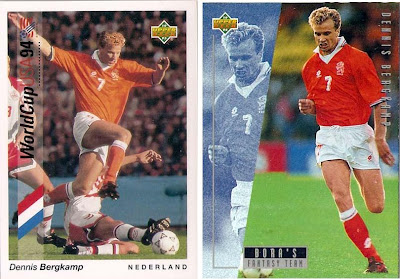 Bergkamp's story is not news as anyone who knows the tale behind Hockey Hall of Famer - Lorne "Gump" Worsley. Gump was a legend for losing as many games with the hapless N.Y. Rangers as he was for his great play with the Montreal Canadiens dynasty of the 1960's.
But playing hockey in the Kingdom of Canada - especially Montreal - was more pressure than Worsley could handle. In a flight between Montreal and Chicago, Gump had a nervous breakdown and had to be hospitalized.
He retired shortly afterwards only to be lured back when the league expanded. He was called to mind the nets for the Minnesota North Stars (he was told that it was centrally located and required little travel). In doing so he became the second to last goalie NOT to wear a mask. He is seen here on his 1965-66 Topps card with the Habs (left). One of my favorite cards is this 1973-74 topps card depicting Gump without his mask in a play-off game. 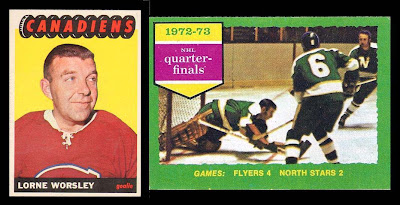 There are several rock bands that have paid tribute to "Gump" Worsley. I tip my mask to you too Gump !