Do you see what I see ? Athletes with glasses. You don't see that anymore.

The perfection of affordable quality contact lenses has made the bespectacled sports stars a thing of the past - except on sports cards. I have pulled a few notable persons who wore wire rims, coke bottles and goggles.

The most famous name - last name that is - belongs to Joe Di Maggio's brother Dom. Dom can be see on several cards including his 1952 and 1953 topps cards. 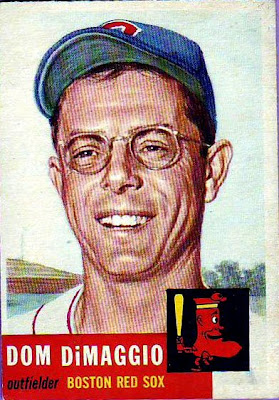 One of my favorite personalities is Tiger great - Denny McLain. For all his legal troubles Denny is still the last pitcher to win over 30 games in a season. (31 victories in 1968) Although McLain is seen wearing glasses on the first few years of his topps cards (including this 1968 All-Star) he no longer has them after 1971. 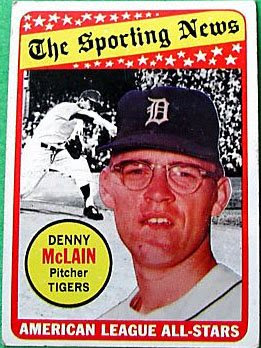 While baseball cards feature the most players wearing glasses it is not limited to that sport. The NBA superstar that made it fashionable was L.A. Laker - Karrem Abdul-Jabbar. Another well know lens wearing Laker was basketball pioneer George Mikan. 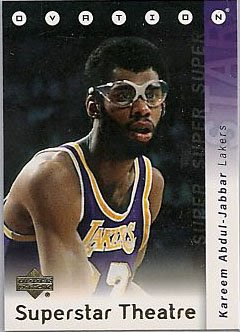 Hockey cards, for obvious reasons, seldom saw players featured with glasses. With today's technology it would be easier for goalies and even skaters with visors to play the game with visual assistance. One of the rare instances where an NHL er wore the specs was Al Arbour. During his career, Al was seen on most of his cards donning the horn rims. He went on to coach the New York Islanders to four Stanley Cups (1979 -1982). 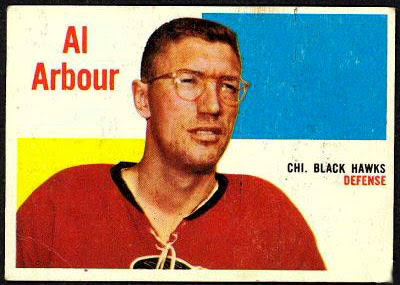 The most prolific of our "four-eyed" favorites has to by NFL running back - Chuck Muncie. He has the honor of being bespectacled on every single card from his rookie year (1977) to his last card (1984). Like no one would notice that Topps did a fancy air-brush between years. After seeing his cards in perspective, you wonder if Topps thought Chuck was a running back or a sideline poser ? 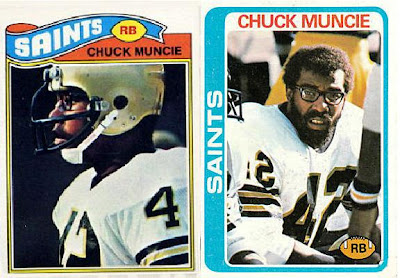 If anyone knows of a player who appeaed more times than Muncie with his glasses, I would be interested to know.
Posted by Chuck's Used Cards at 11:52 AM

Chris Sabo and Alex Cole are two that come to mind for me.

Cool post. I was busting some 1987 Topps Baseball packs this morning and pulled a card of Darrell Porter with big glasses.

One other thing...is it just me or does the 1953 Dom DiMaggio look an awful lot like, David Eigenberg, the guy who played Steve Brady on Sex and the City? (http://www.hbo.com/city/cast/index.shtml) Yeah, I know....

Nice Al Arbour card. Of course, on further review, Topps/OPC just re-used the same photo of Arbor over and over:

As for another hockey player who wore glasses, how about Chris Simon? He wore sports glasses for maybe the first 8-10 years of his career, if I remember correctly.