With so much soccer on TV these days, World Cup Qualifiers, Euro 2012 - I find myself writing the blog either before the 11:45 morning game or after the 2:45 afternoon match. Its what I love about these tournaments - every day through the week there is a game.

But there is nothing like attending a live game at a stadium. I was fortunate enough to get two matches in two weeks here in Florida. The U.S. National Team played Scotland on May 26th (Jacksonville) and returned (to Tampa) for a World Cup match on June 8th. So, I made a special effort to get one of the harder signatures in person - 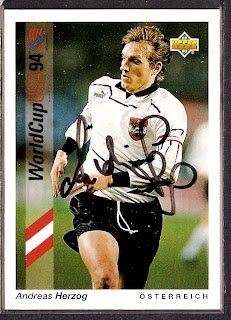 Herzog was well know outside Austria as a international star, but also a top star in the German Bundasliga with Werder Bremen. He was part of the Austrian side that defeated the USA 2:1 at World Cup 1990 in Italy. He also played in the 1998 World Cup and is his countries all time leader in caps (103).

I decided a while ago not to let the glut of low end soccer cards go to waste. I have been getting my Upper Deck World Cup and 1990-91 ProSet English League cards signed every chance I get.

I have about 75 Upper Deck cards autographed and about 35 ProSet - all signatures obtained in person. I have duplicates autographs of most of the players.

This past weekend, I struck gold (or should I say yellow ?) with baseball autographs. I found an estate sale that was liquidating a collector's baseball collection. I spied a box with a few Perez-Steele 4 x 6 cards. I asked about the price, and got a favorable reply. So I picked out (what came to) 22 cards.

These included 2 HALL of FAME Plaques signed by deceased players. They had stickers on the plastic sleeve indicating "died in 1988" and "pre-stroke" regarding the autographs. 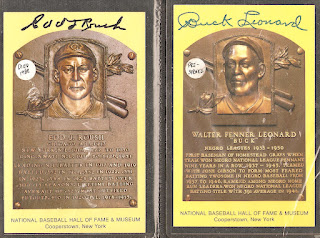 I found an ED ROUSH and Negro Star, BUCK LEONARD

Roush was with the White Sox in 1913 but on the winning side of the 1919 Cincinnati Reds whose defeat of Chicago led to the Black Sox scandal. 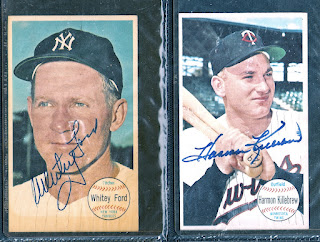 The second batch of autographs were what blew me away. I'll post them next.