I'll Raise You A Pair of Hall of Famers - McFarlane Style

One of the perks of being a special guest of a comic book convention, is that people often bring you stuff in appreciation. I've given a good amount of artwork to comic book and toy dealers. Many use it to promote their stores.
At this weekend's show, I had indicated to one dealer that I liked hockey and was looking for goalies. Well, he didn't have any goalies to give me - and not even any teams I follow.
But you can't look a gift horse in the mouth. JOE SAKIC
He had his assistant bring over two McFarlane hockey figurines. Both were Colorado Avalanche players - One current Hall of Famer and one future Hall of Famer. 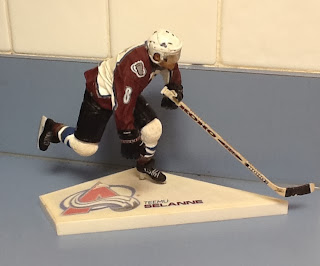 TEEMU SELANNE
While Joe Sakic became an Avs legend in Colorado winning 2 Stanley Cups. Selanne spent one, less than quality, season there before returning to the Aneheim Ducks.
Both players have scored over 600 NHL goals and played over 1000 games.
Each player has represented their respective nations, Sakic - Canada, and Selanne - Finland, at the Olympics and World Championships.
These figurines are super cool. The details from the jerseys to the hockey sticks are impressive. But I'm still looking for goalies ...

Free McFarlanes? Nice. I've always been a fan of Sakic. Love the way he played and the fact he stuck with one franchise his entire career.

What ? No love for Selanne ? Oh yeah, da Sharks and Ducks don't get along. You being a Shark fan ... LOL

Even when Selanne was with the Sharks, I didn't like him. Surprisingly... it has little to do with him being a Duck (Paul Kariya was one of my favorite players). The first time I met Selanne, he was at the Ducks Casino Night and he was a jerk. That memory has sort of stuck with me over the years.