To sports purist, very few things can be more detrimental than losing our favorite athlete to a casualty of war. Much like the loss of NFL player Pat Tillman, the effects of war and politics can be devastating on sports. On this Veteran's Day, we look at a particular card set that exemplifies a military influence on the game. While not all casualties result in death on the battle field, some are just reminders of political ineptness and abused power.
I recently acquired 5 cards from a very important soccer set.
The 1939 KICKER BILDERWERK card set was issued in Nationalist Socialist Germany (I.E. Nazi Germany). Prior to 1938, Germany had it own sporting teams and representative athletes. They participated as such in the 1934 FIFA World Cup and the 1936 Olympic Games, which they hosted.
However, after 1938, Germany annexed territories that they occupied through political and military force. One such area was AUSTRIA. 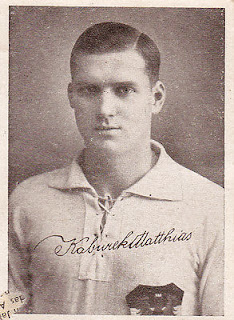 Matthias Kaburek
The KICKER series is a very large set that features German soccer players from the earliest international from 1901 to the issued year of 1939. It is an excellent and comprehensive collection complete with an album. For a great number of players, this set includes their only existing card.  Matthias Kaburek had already appeared 4 times for Austria, scoring 2 goals. Within a year he was playing for Germany. His only card (see above) appears in this set. 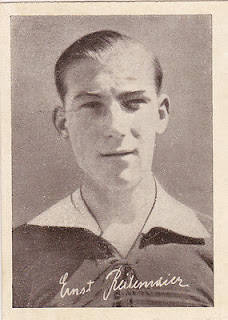 Ernst Reitermaier
This hold true for most of the players whose career took place before 1926. The album contains short biographies and of course some propaganda photos of the German Fuhrer - Adolf Hitler. Although he appears to be only in the 2nd edition printing of the album. 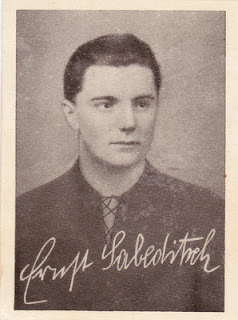 The other significance of this set was that Austria, which was annexed by Germany, had no known soccer card sets prior to World War II. So when they were occupied, their league and players became part of Germany's League Championship and National Team. Although both Germany and Austria played in the 1934 FIFA World Cup, they appeared as one nation in the 1938 Tournament. (Austria had qualified had they not been annexed). 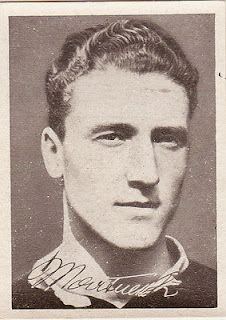 Alexander Martinek
Several Austrian players appeared for the German National Team from 1939 to 1944. One such players was Alexander Martinek who kept goal for Wacker Vienna. Inducted into the German military, he was stationed in Hamburg, Germany, and subsequently was transferred to the local club Hamburg SV. He also was conscripted to play for the military club HSV Great Born.
Although he had a successful run at Hamburg SV, he was deployed to the Eastern front where casualties ran high. He lost his life in battle at age 25. 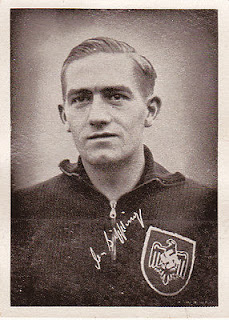 Otto Siffling was a home-bred star of the Waldholf Mannheim soccer team. He starred in the 1934 World Cup for Germany and represented the country in the 1936 Olympics. To his dismay, Germany lost to Norway in Berlin.  Adolf Hitler attended the match but left before the end. It was the last soccer game he ever watched as he already detested the sport.

However, this did not deter the Nazis from capitalising on any victory or sporting feat to further their cause. When Germany defeated Denmark by 10-0 in 1938, the hero of the game was propagandized as a superior athlete of Germany. Otto Siffling scored 5 goals and assisted on three others that day.  Hurled unwittingly into the Nazi limelight, he could never shake the uneasiness of their worship.

Siffling's form suffered and he was left off the 1938 World Cup Team. He was diagnosed with pleurisy and died the following year at age 27.  Siffling appeared in several pre-war sets, however, his last card (see above) was outfitted with the heraldry of the Nazi regime.

There is a wonderful footballing tribute to Otto Siffling here - http://otto-siffling.de/
although it is all in German, the memorabilia and photos are tremendous. If you want to dig deeper, use google translator to read the text.

To all those athletes in in a time and place where they would rather have played, but served despite the circumstance - WE SALUTE YOU this Veteran's Day.