For all the media attention, marvelous goals and exploits of Zlatan Ibrahimovic, he still has come up short on the international benchmark. No, not to Lionel Messi or Cristiano Ronaldo - but to his own countryman - SVEN RYDELL. 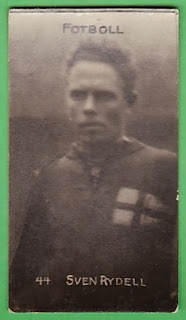 ROSE MARIE Chocolates - Sven Rydell
Rydell's international tally of 49 goals is ahead of Ibrahimovic's current total of 46. What is fantastic about Rydell's mark is that he achieved it in only 43 matches, while Zlatan has done it in 93.
Unfortunately, neither player has appeared in a FIFA World Cup. However, Rydell did lead Sweden to 3rd place at the 1924 Olympics - before the first World Cup was ever played.
Sven appears (above) in the rare 1930's ROSE MARIE chocolates issue. The set included Swedish personalities mostly from film and sport. 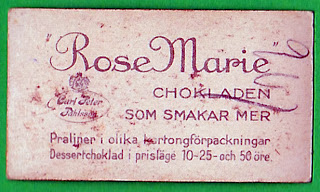 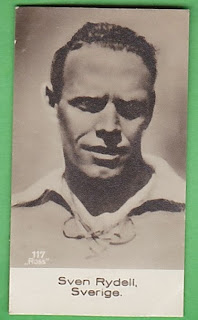 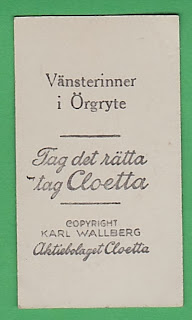 Sadly, the card set has been mis-identified by the idiots at PSA. Once again, their refusal to listen, research or confirm exposes the arrogance of money grubbing swindlers.
A perfect example of an erroneous label on the tag of PSA's products. 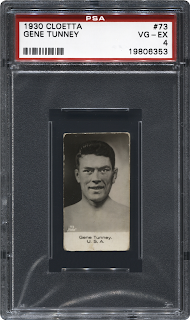 PSA goof
President and CEO of PSA, Joe Orlando, sent an open letter last week begging for collectors to understand the procedure of grading at his company. He claimed that some hobbyist just "don't get it".
Sorry Joe, you just don't get it. You cannot label precious artifacts willy-nilly just because someone throws money at you.
There have been international collectors researching and compiling proven data on these soccer cards. So, we request that you either reach out and ask for help, or stay out of our hobby - once and for all.