Growing up in the 1970's I was a fan of the Montreal Canadiens - starting with Guy Lefluer, Ken Dryden and Larry Robinson were just beginning their Hall of Fame careers. So I collected them pretty actively up until the 1980's.
But looking back now, there were only 12 and then 14 clubs until expansion in 1974. Many of the great Canadian stars were sent to the new teams in the USA. But some remained with the "royal two - Montreal and Toronto. Two in particular were Jaqcues Plante and Frank Mahovolich (from Canadien to Maple Leaf and vise versa).
But one guy stayed with the same club and collected 11 Stanley Cups - more than any other player. Although he was the younger brother of Maurice "Rocket" Richard, he was 15 years his junior and 3 inches smaller. Thus he was dubbed "Pocket". 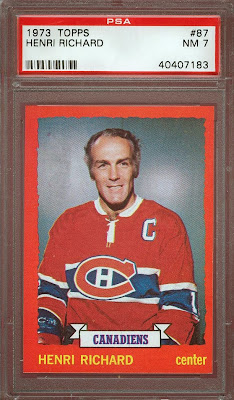 1973-74 Topps Henri Richard
However, Henri, beside the record Cup rings, also amassed over 1000 NHL points - something his iconic brother did not. I picked up this graded card for a steal. It depicts a gray-haired Richard wearing the Captain's "C" and looking like royalty sitting for a portrait. 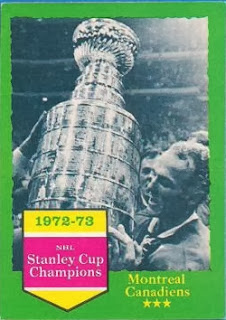 Henri Richard also appeared on another card in the set as he lifted the Stanley Cup trophy (which I already had). I still need a few key cards from my 1970's Montreal Canadiens run. Most of these are the squad players in the O-Pee-Chee card sets.
If anyone has some 1970's Montreal players to trade in the above condition or better, let me know.