As anyone who reads this blog knows, I am a collector who likes an international flavor. I read and follow other collectors - far and wide, some in other countries, some here domestically.
One fellow blogger in California is "The Chronicles of Fuji" with whom I did a little trade. He sent me an array of Japanese trading cards. The first card we see here is a 1979 TCMA card of Japanese pro baseball. The card is very much like its U.S. counterparts from the mid to late 1970's. 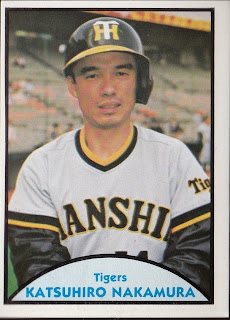 The second grouping was some modern Japanese baseball cards. Its hard to red the print as its quite small on both the front and th back. Only one player from this lot played in MLB - spending 2 seasons with the Kansas City Royals organization. He cost $6 million and played 3 games.
(and we wonder why baseball teams go broke ?) 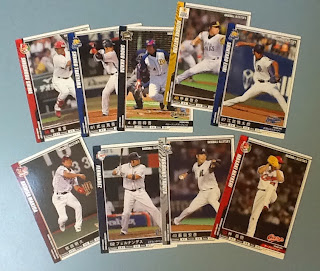 2012 Konami Japanese Baseball cards.
There were also two mascot / checklist cards. These reminded me of Pokemon come to life. 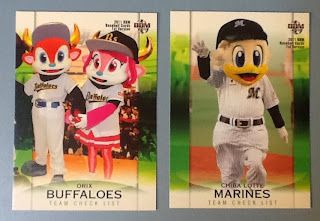 Baseball Magazine mascot cards.
Basball cards have along history in Japan. Like their American counterpart, the sport enjoys not only trading card company issues, but also food and beverage associated cards.
One such product - CALBEE - makes potato chips and other snacks. They have distributed baseball cards with their product since 1973.
However, baseball has begun to take a back seat to the international game of soccer in Japan. Since co-hosting the 2002 World Cup, the soccer teams and players have enjoyed super star status. Many of the National Team players are signed to lucrative contracts in Europe.
So it is no surprise that Calbee has expanded its premiums to soccer cards (see package below). 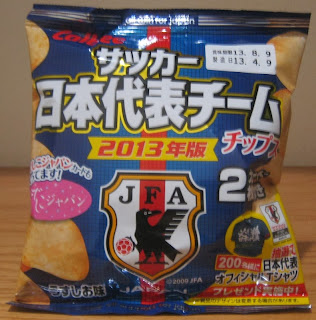 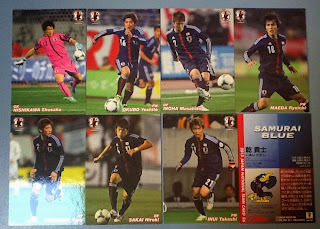 The pick of the lot is Shinji Kagawa - who starred with Borussia Dortmund. He led them to the German Championship in the 2011-2012 season. He was sold to Manchester United and won the 2012-13 English Premier League. With back to back title trophies, he is one of Japan's highest profile stars. 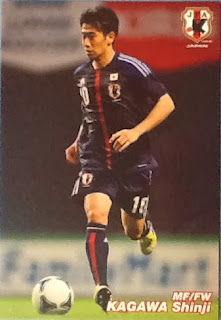 2013 Calbee Samurai Blue - Shinji Kagawa.
It is an interesting group of cards. Thanks for the trade Fuji.
Posted by Chuck's Used Cards at 2:02 PM

Glad the cards arrived safely. Thanks for the trade.