One of my fondest memories of breakfast time as a kid was getting FREE stuff inside the cereal box. These items ranged from plastic scuba divers to rubber band aircraft carriers (remember those ?).
Mornings of swilling milk and sweet oats were intertwined with "reading" the front, back and sides of the specially marked cereal box.
But being a sports fan was extacy, staring at these boxes, and wondering who's card was buried deep inside the crunchy sweetness. When the treasure was finally extracted from the bottom of the sea of cereal, I would have a second bowl of breakfast and gaze at the 3 dimentional awesomeness of the baseball card. 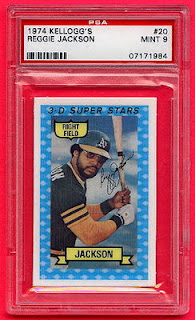 The bluest of sky and the whisps of clouds - distanced in the backdrop of a brightly covered athlete. These were almost like a magic window to a magical baseball diamond outside.
This week up sprung for two 1974 Kellogg's cards from the evil of the bay (ebay). Not that I am an advocate of PSA or their mystical registry sets (another evil), but I have found it convenient to track my collection on their web site. I have a good number of Kellogg's cards - including the complete elusive 1971 set. However, none of them are graded.
A few years ago I traded for about a half dozen PSA 9 Kellogg's cards from the 1974 set. This only included 1 Hall of Famer - Orlando Cepeda.


Picking up the Reggie was great because I was a fanatic Jackson and A's collectors in my hey day. Billy  Williams was once with the Oakland A's, but he is best remembered as a Chicago Cub. Cubs fans are a sad lot - examplfied by the disgraced behavior and treatment of a fellow fan who only reached out to catch a baseball*.
Although I am in no hurry to finish anything these days, I would like to trade for more of these 3-D cards. I have a wealth and variety of cards to swap, so if you have any of these, please contact me - tell me what you collect.
DO YOU LIKE THE 3-D KELLOGG'S CARDS OF THE 1970'S ?
* I refrain from putting THAT fan through any more pain by mentioning his name. If you want, you can look it up. (Cubs fans)