As much as I love hockey, I came to realize this week that I am a casual collector. When hockey is in season and when the jet stream blows cool air to Florida - my hockey senses highten.
More to the point, prior to this week I did not own one original Parkhurst hockey card ! 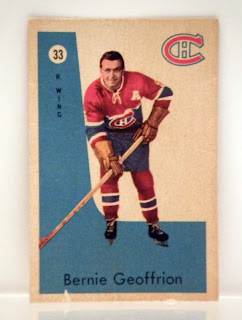 1959-60 Parkhurst Boom Boom Geoffrion
Then I saw this card (above) of Hall of Famer "Boom Boom" Geoffrion. The price was right - $5.00
As a week passed and the auction concluded I had purchased other hockey cards (to be featured in a future blog). The seller of this other card filed a non-payment alert after TWO DAYS !
Not a big surprise from ebay. While I duely paid for the second card (I had been away), an email came from the seller of the Geoffrion card. The gentleman apologized for not sending out the card as he and his wife were also away. I wrote back thanking him for the note and told him its ok, that I now know the card is on its way.
Now, I do not have it on any authority, but I think this gentleman was a Canadien. Most of the retires that own vintage hockey in Florida are from North of the border.
So when the paackage arrived today, one envelope was labeled - two cards. One being Boom Boom and the other an odd ball card of BABE RUTH. Its marked 1992 Delphi - and believe it was issued to promote or compliment a limited edition collector's plate. 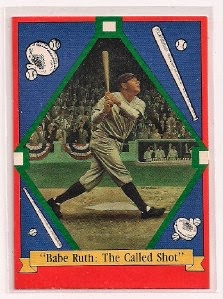 Although I already have this card it was a kind gesture. The other envelope was marked - coin. I have to say, I love sports coins. So, it was to my delight and surprise to pull this - 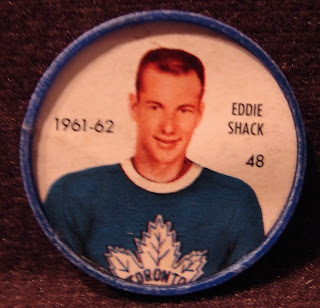 1961-62 Shirriff hockey coin of Eddie Shack.
A SALADA FOODS Shirriff hockey coin. It was of a Toronto Maple Leafs player Eddie Shack. Again, it was a first for my hockey collection.
Eddie won the Stanley Cup 4 times with the Maple Leafs and played over 1000 NHL games. But here is a factoid from Wikipedia -
During the 1966 season Shack broke out, scoring a career high 26 goals on a line with Ron Ellis and Bob Pulford, and his popularity was such that a novelty song called Clear The Track, Here Comes Shack written in his honour and played by "Douglas Rankine with the Secrets".[6] It reached #1 on the Canadian pop charts and charted for nearly three months.
Speaking of facts, poor Boom Boom was outed on the back of his card - "a deep growing pain in his groin area slowed him down" and caused him to miss another NHL scoring title. 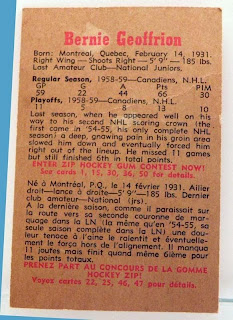 Growing up near the Canadian border I got my first hockey cards in 1971 (still my favorite set). However, my collection only grew newer from that point. Now, I am enjoying going backwards to vintage. I especially like Canadien food issues.
If anyone has any Canadien food issues you will trade for other sports cards, let me know.
WHAT IS YOUR FAVORITE COLLECTABLE HOCKEY ISSUE ?

I still have a soft spot for the first hockey cards I collected as a kid, Topps 1968-69. I still have them and have featured a few in my birthday posts.