Avoiding The Idiocy Of PSA

When it comes to the logical collector, a certain grading company just cannot help but appear to be idiots. For anyone who has read the book "The Card", many of the fears of a priceless collection become a nightmare of worthlessness.
I've tried to educate some of the people at PSA. However, one cannot make the blind see or the deaf hear. I've featured several of the "boners" that PSA has given us in their ignorance of soccer cards.
So, here is one more to add to the pile ... 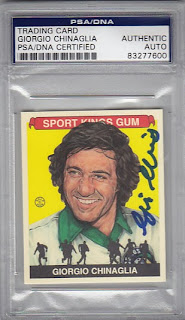 Its labeled a "trading card".  Really ?  I thought it might be a flying carpet !  What's sadder, is that the card is listed on evil bay with what I would deem "over priced" - see also insane, nuts, wacko or just plain koo-koo.
I am hoping that my contacts at one of the other grading companies heeds my advice and pays attention to the market. They may just do well as soccer card guides as collecting has the greatest potential of any sport. Here is why -
1. soccer cards are still relatively affordable
2. The sport translates to any part of the world and so does the internet.
3. Because so much is unknown about the early sets, its a challenge even for seasoned collectors.
4. The largest nations for sheer numbers (China, Japan, USA and Brazil) now have the economy to purchase what was once produced for a collecting population of only a few thousand. Demand cannot keep up. The early collectors will have the picks.
PSA are going to fool some people - but the smart ones will not fall for it. There are many dealers now on the Internet selling false "rookie cards" for good money because there is little guidance.
But that may soon change.
This (insert DirectTV situation here) is what happens when you  order PSA. Don't order PSA.