If your calendar is anything like mine, it is hard to tell what holiday is around the corner. As schools resume classes, we know there is a day coming that signals the end of summer. Sometimes it is confused with Memorial Day - but it is actually Labor Day.

Recently I found some interesting cards relating to American military men. These were included as a subset in the Topps Heritage product. It seems that there is alot of these inserted into the baseball sets and some non-sports sets.

Although the card below depicts Teddy Roosevelt - it is one of his fellow Rough Riders whose boot leather is displayed on the card- one such Maj. General Austin may have wore these in a charge up San Juan Hill in the Spanish-American War. Austin was actually Captain of the 71st Regiment, New York Volunteer Infantry entering the war. His wife was also related to President John Adams. Another card in this set holds a swatch of a signal flag from World War I. Could this have possibly been used to send in the troops or warn a battleship of an attack ? 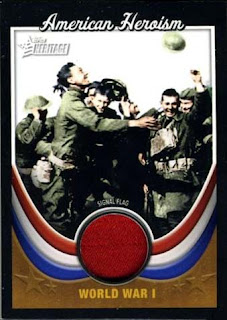 These are truely cards for grown ups. I am satisfied that the relics disected for these cards were not rare or irreplacible artifacts. Unlike some of the jersey, bats and other sports items - these are common enough to share.
When I was growing up, I always wanted the cool G.I. Joe set with all the accessories - guns, rifles, granades, maps and, of course, a jeep.
What we could afford was the card set made by the Whitman Publishing Company in 1964. It was a good looking colorful set. The G.I. Joe card game was just one of many themed play sets made by Whitman. 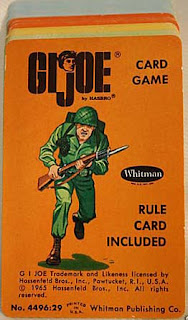 The deck consisted of four "suits" - which were the branches of the armed services - an Army foot soldier, a Marine flame thrower, an Air Force pilot and a Navy frogman.

The artwork was exceptional and the design very much in tune with the 1960's. I wonder how good a custom made card might look with a swatch of 1960's uniform added to one of these Whitman cards ? Naaaaaah.
One of the drawbacks of today's issued sets is that they are aimed at strictly at adults. A little more play and a little less labor would be a good advice for the hobby.

Where the HELL Have I been ?

For over 6 months I think its pretty safe to say - I have been invisible when it comes to writing this blog. The beauty of this pre-occupation is that its not a job - you can't get fired, you can't get laid off and even if you cannot afford to purchase additional cards ... you can enjoy reading or writing about them. I have been busy with other things ... like work (from which I could potentially be dismissed) and making a living for the family.

I used to wonder why some of these sites would be idle for so long. Why bloggers did not have anything new for me to read.

I have come to realize that fellow bloggers have other responsiblities. And to keep it fresh, you need to take breaks. Mine was quite lenghthy - in relation to card producing outputs.

So ... starting next week I will begin to write again on this blog. I hope to return with new enthusiasm and insight to cards and collecting. I look forward to reading other blogs as well.
Posted by Chuck's Used Cards at 1:00 PM 3 comments: