It is play-off time in the NHL. The expanded series from the coast of California to the shores of Atlantic, the puck is dropping. If you are a reader of this blog, you know I love to wax nostalgic. 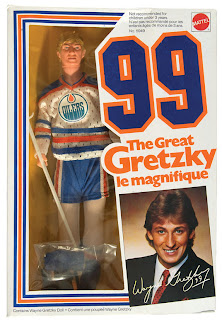 When it comes to NHL records - one name, one great name, appears over and over. WAYNE GRETZKY. So when I saw that one of the toys from the 1980's was up for auction recently,  it flooded back memories from the glorious collecting of everything Gretzky. 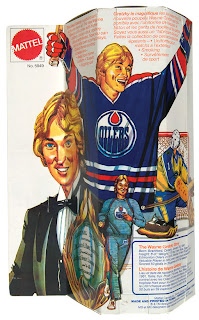 I had as many cards as I could get my hands on in the 1980's - Canandian, American, food issue and special issues - I had them all. And then there was the Mattel doll figure. Yes - the same people who make Barbie and G.I. Joe.
I happened to be at a summer fireman's carnival around 1985-86. The "carnies" had their usual games of shooting and hoop tosses. There was a gambling tent in which you would throw a little red ball and try to get a "Bingo". It was called "I got it" - which you shout out if you had a winning pattern.
Well, I sad down with the chain smoking geezers and gray haired ladies to play the game. Not by choice, but rather because among the cigarette lighters, pocket knives and stuffed animal prizes - was a Mattel Gretzky doll.
To make a long boring story short - I got it ! So these days, during the play-offs, ol' Gretz is propped up in the corner with my sticks and Canadian touques to see who can come close to his records.
As far as I am concerned - No one can.
Posted by Chuck's Used Cards at 5:26 AM 1 comment:

Absorbed in The Golden Age of Comics

Ok. I admit part of my absence has been due to plain lazyness. However, the other half I feel is my legitamate efforts to add to the trading card universe. 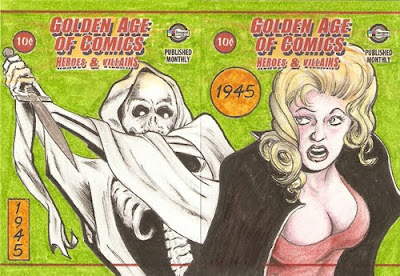 You see, although I do not do much artwork any more, I was asked to contribute to an upcoming set - THE GOLDEN AGE OF COMICS - due to be released this week by BREYGENT MARKETING. 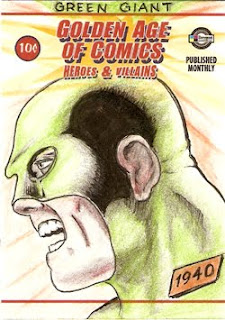 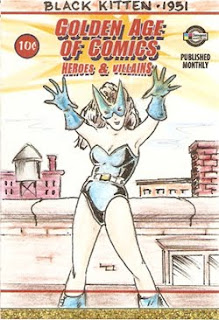 To further delay my return to blogging, my sadistic ego took on two additional projects for CARTOON sketch cards and the Sci-fi / Horror poster card set - due out in June and August respectively. I have enjoyed this imensely - perhaps too much.
I was lucky enough to have all 4 of my 5x7 sketch cards selected to be exclusives for the 2010 SAN DIEGO COMIC CON. Here are one from the Comics and one from the Cartoon series that will be featured at the biggest Comic Con in America. 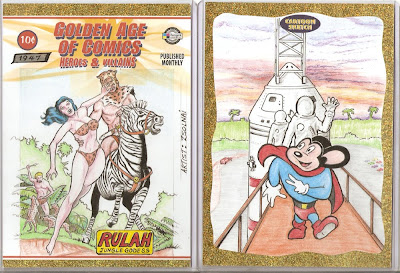 While my work may show a little rust, there are some really fine artists involved with these projects. And for those who want investment in their cards, I would submit that sketch cards are the future just as original comic book art was about 10 years ago. If you have been tracking the auction prices for original comic art - it is $kyrocketing.
I will be finishing up my contracted work with these soon and have been alloted a few "artist proof" cards which will allow me to sketch commissioned cards which will go straight to a few select fans rather than to the packs. If you are interested, please send me an email.
Excelsior !
Posted by Chuck's Used Cards at 8:33 PM 2 comments: