LET THE GIVING BEGIN ...
With the holidays comes the inevitable holiday shows ... The Grinch Who Stole Christmans, A Charlie Brown Christmas, Rudolph the Red-Nose Rain Deer etc.
Those are the good ones ... and a few movie classics.
All the different versions of the Christmas Carol and their copies will be televised. This includes the old black and white classic - Its a Wonderful Life. Which brings me to the card of the day:

1938 Players Cigarettes - Jimmy Stewart. For those of you younger than 30 or don't watch TNT / TBS / AMC it is a story about a man who lives his life as if he was never born.
The holidays are a great time for giving, getting and sharing cards. I often wonder what my life would be like without collecting cards. Well, it would probably be black and white just like the old films.
I came of age with cards in the 1970's when my breakfast table was adorned with the cereal boxes which actually contained something of value. In those days, it was very cool to get a 3-D or three-dementional card.
Kellogg's began putting these in their morning offering and I was hooked. But as great stories go, we moved from thr city to the suburbs and as luck would have it, our new neighbor worked for Xenographic Company.
As a "welcome wagon" gift he gave me a set of 1971 Kellogg's baseball cards. I was awed by the moving background of sunny stadiums and blue skies behind the players picture.
There were certain players, before I knew who they were, that seemed majestic in their pose. They looked like superstars. Al Kaline, Willie Mays and Ernie Banks fit the part.
Then there was Roberto Clemente. I was not a Pirates fan then, nor am I one now. But I became and always will remain, a Clemente admirer. We lost Roberto around the holidays - on his mercy mission. He reminds me that is is better to give than recieve. So I will be giving cards as gifts to many people.
Pass the drumstick ! Happy Thanksgiving. 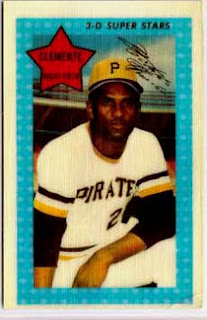