The A&BC s of Footballers - the First Year

The first product of any card company is always special. The 1952 Topps baseball is idolized for its inclusion of the Mickey Mantle card. The 1958 A&BC Chewing Gum card set is actually the second sports product from the British card makers. 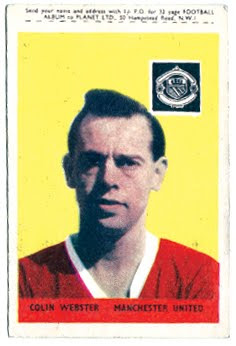 The 1954 A&BC All Sports was a multi-athletic set but did feature some great soccer players. However, the first complete soccer set by A&BC was this 1958-59 series. This feaured the rookie card of England's all time scorer and Manchester United great - BOBBY CHARLTON. 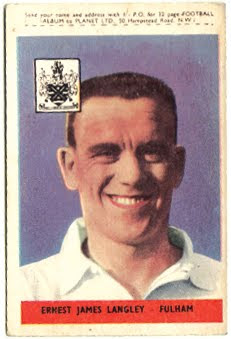 I recently traded for 5 cards from this colorful set with my friend Stein. A&BC - also known as the American & British Company Limited - produced sets from 1958 to 1975. They were then purchased by Topps. Topps continued the soccer sets up to 1981. 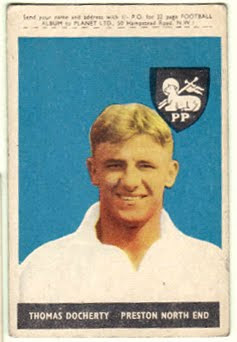 You can see that the two makers already worked together by the similarity of designs from the Topps baseball and the A&BC soccer cards. 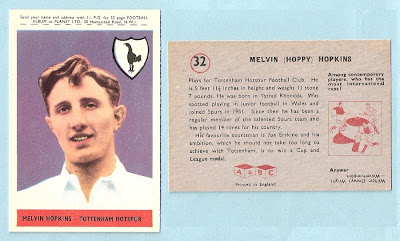 I have already completed two of the A&BC sets - the 1967 and the 1971 series. I have about 75 % of the 1959 set and got a nice start on this 1958 set. The variations are still a curiousity as the debut series were issued wih the Planet album offer and without
the Planet offer. Yet, even the with versions have been found to be on different sizes.

Of course the "with Planet tabs" are more desirable, the ones without were designed to be put in the album. As you can see by the dotted line they expected the collectors to trim off the tab to fit in the album. 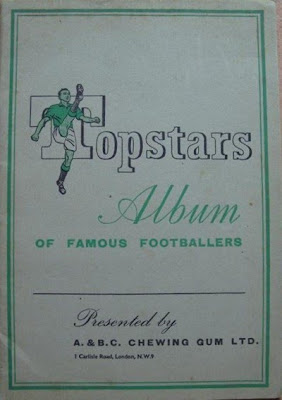 I am looking for any trades on these cards. Speak up and get yourself a deal ...
Posted by Chuck's Used Cards at 4:45 PM

thanks for the review and input. I was mearly explaining that the 1952 Topps baseball was the first complete contemporary players set by the company.

There were, or course, earlier sets. This is parallelled by the A&BC soccer cards evolution.

On a side note, my blog www.canadacardworldblog.com has been nominated for the Upper Deck Blog Awards. If you're interested in some free sports cards, please visit our site, follow the simple rules, and maybe we both can win!