While this post may have less to do with cards than soccer, when something is cool, it is worth posting. Firstly, I have to ask what is not to like about a team that has a weapon in its logo ?

I've had enough of cute, furry creatures, Disney-made animatrinic mascots and stupid fantasy photoshop emblems that have plagued American sports teams. The saving grace of traditional soccer clubs is that they fought for every square foot of territory in which they play - Arsenal F.C. with a cannon, Sheffield United with crossed swords and Portland Timbers with an axe !
What makes Portland Timbers even more intimidating is that they had the balls to go up to Seattle and post this billboard right near Qwest Field (see sports complex to the right). 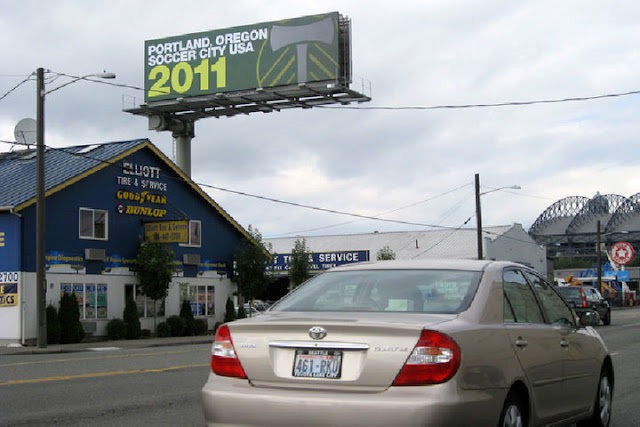 Seattle were dubbed "soccer city" by MLS Commissioner Garber as they have over 36,000 season ticket holders and draw over 60,000 for some matches.
You see, Portland will be joining MLS next year from the 2nd division, just like the Seattle Sounders did a few years ago. and now the rivalry they had in the USL gets more intense.

The Portland faithful are chomping (or should I say chopping) at the bit as seen here on youtube.

All this just makes me laugh at the idiots who think soccer is the sport of the future ... its already here bub. You might just want to come out of the cave ... soccer moms need not apply.
Posted by Chuck's Used Cards at 10:27 AM