Youngest Rookie of the Year ... ever, Gets A Card !

Major League Soccer's 2010 Rookie of the Year - Andy Najar - becomes the youngest ROY in the 5 major sports. The 17 year old DC United forward surpasses the Winnipeg Jets' Dale Hawerchuk, who was 19 when he won it in the 1981-82 NHL season. 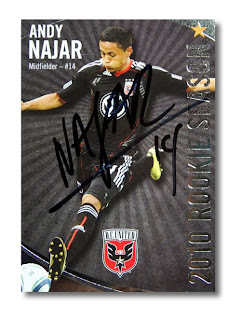 To commemorate the event, DC United issued a collectors card (above) exclusively for their season ticket holders. All copies are to be signed by Najar.
Posted by Chuck's Used Cards at 5:58 PM

Hey fellow Chuck. So has football caught on so intensely/well in Portland, but not the rest of the country?

If you are in Portland, there are many who should envy you. The Timbers are going "all out" to get ready for MLS. New Adidas jerseys, renovated Stadium, new player signings ...

My friend and Portland coach John Spencer does not do anything half-way.

Portland Timbers have a great history and it looks to continue.

Trust me when I say club soccer in the Northwest will be awesome next season.