What makes a player a LEGEND ? Many make it onto a trading card, some are memorable and a few, if lucky, are immortalized. For a country that had not appeared in the World Cup in 40 years (1930 to 1990) any spark could result in being an instant hero. 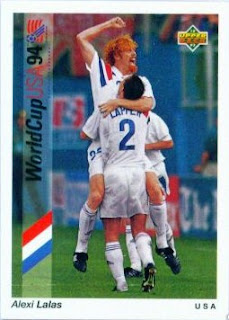 The American who achieved that status was ALEXI LALAS when he scored the goal (above) against England in the 1993 US CUP at Boston. It seemed it was the first time Americans were playing without fear of the legendary soccer nations like Brazil, Germany and Italy. 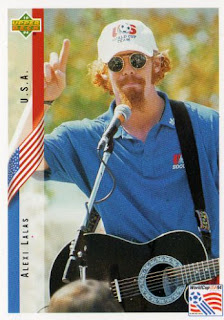 Lalas was not just an average clean-cut American athlete. He honed his playing skills playing pick-up games in Michigan, then onto the Ivy League at Rutgers University. He played guitar in a rock band and even sang the national anthem at the 1st MLS CUP. He was instantly recognized for his trademark long shaggy red hair and goatie. 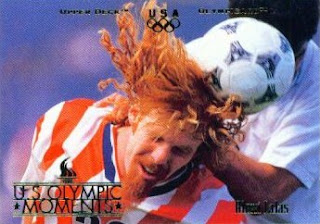 He was an Olympian footballer at the 1992 Barcelona Games. His international profile as a "never say die defender" and the goal against England made him one of the  high-profile players on the 1994 U.S. World Cup Team. After the 1994 Tournament he was signed as the first native born American in Italy's Serie A. 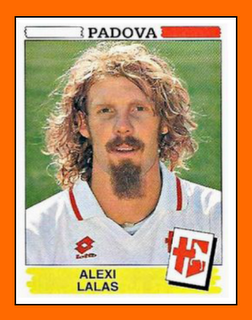 The "American Cowboy" as he was known, almost single-handedly saved the Padova from relegation by scoring two goals in the final three games of the season including ones against powerful AC Milan AND Inter Milan. 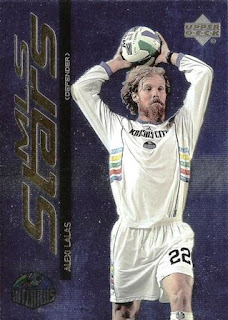 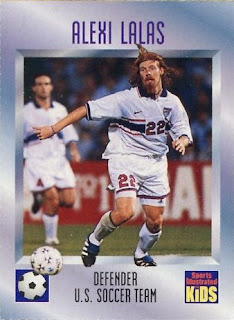 After 7 seasons in MLS, Lalas accepted a position in the front office at the New York club. Although no great achievements were noted here, he moved on to become the Los Angeles Galaxy's new General Manager. There, he hired former Dutch great Ruud Gullit and was part of the team that brought in David Beckham. 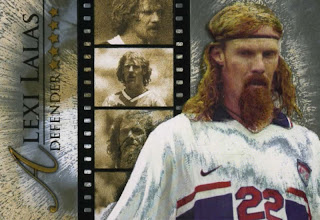 Both those decsions had converse effects on the club, the league and the game in America. Regardless, Alexi Lalas has put his own stamp of uniqueness on the game. He has earned the apearance on a 2011 FUTERA LEGEND card.
Posted by Chuck's Used Cards at 12:48 PM

Thanks Alex,
I am a fan of your blog as well.