Long before the internet, there was a day when cardboard cards were a rich resource of information.
One card set that held such vital stats was the 1922 F&J Smith Football Club Records. 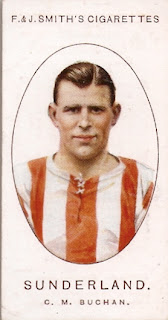 F&J Smith had issued several excellent sets from 1912 on using mostly black and white photographs. For the 1922 issue they selected on player for each of the English and Scottish top divisions for a total of 50 cards.

Each card depicted the player in a full color portrait on the front while listing a complete home and away results from the previous season on the reverse. 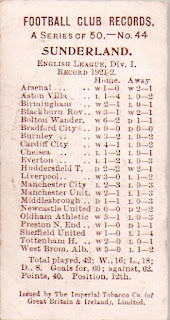 I recently added the Sunderland F.C. card who is represented by CHARLIE BUCHAN. Charlie began with Arsenal in 1909 when they were still known as Woolwich Arsenal before moving to Sunderland in 1911. He was awarded medals for his services in the First World War.

On returning to football, he rejoined Arsenal leading them to 2 FA Cup Finals in the Twenties.

After his playing career, Buchan embarked on a long journalistic profession which included the Football Writers Association which now votes for player of the year. He had his own publication of magazines and annual soccer books. 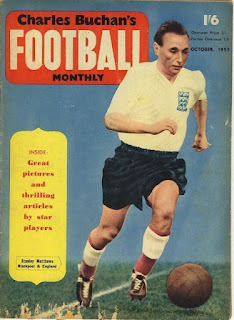 I really cannot tell you when it became official, but I am OFFICIALLY a Stan Matthews collector. I've recently added this 1948 "TURF" Cigarettes card to the SMC (Stan Matthews Collection). 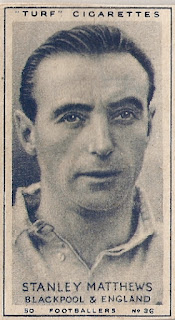 The cards were usually hand-cut from the cigarette packets rather than inserted.
It is one of the last tobacco issues to feature soccer players in Britain. Within a decade almost all soccer cards were trade cards. Although the card appears black and white, it is actually more blue and gray.

Sir Stan Matthews has the distinction of appearing on soccer cards during 4 decades (1930's -1960's) of which he was an active player  !

I was fortunate to have met Sir Stan several years ago and got his autograph and later a letter from him. (I featured this in an earlier blog). My Master List of Matthews cards shows I need about 70 to 80 more cards from around the world to collect ...

Among some of weird finds for the weekend was this pair of horror movie shot glasses. They are in actuality plastic, but the size of a standard shot glass. 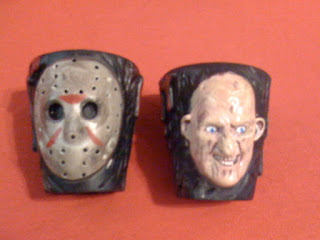 The two ugly mugs are JASON from Friday The 13th and FREDDY KRUGER from Nightmare on Elm Street. 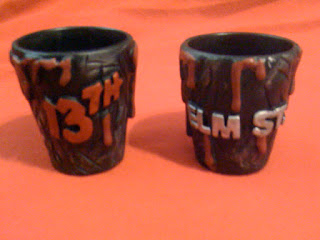