The Opening Ceremonies of the 30th Olympic Games in London begin this Friday, but the games actually start tomorrow. The USA Women's soccer take on the French Ladies. Oh-la-la ...

Like tennis and other professional athletes, the soccer competition will feature some star studded sides.
Sadly, the US Men's Team choked under a college coach and now deprived the next generation of Americans from playing on the big stage.

But, like the Euros, we will still be watching. Olympic Gold is the one trophy that BRAZIL has not won in soccer.

To commemorate the onset of Olympic soccer, I am featuring a pair of German issued Olympic cards. 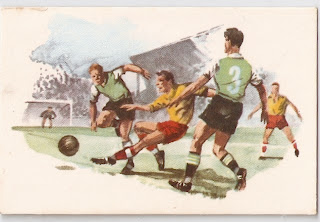 Nice artwork and plenty of colored text on the reverse. 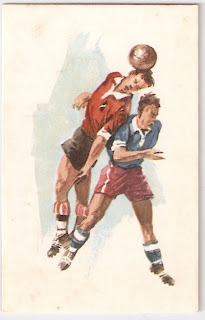 These were curtsy of my fellow collector, Alan. 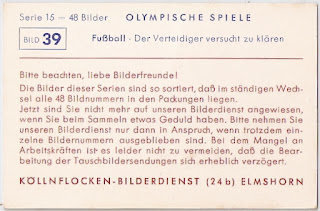 They were produced ahead of  the 1960 Olympics in Rome, Italy.