Our friend Fuji asked what other sports cards we like besides our favorites. Well, if you don't know by now that I mostly collect soccer cards, then you do not read this blog regularly.

But I still have a taste for the ice hockey - and especially for the early days of Topps and O-Pee-Chee.
The colorful boarders of the 1973-74 hockey set was atypical of that decade's issues, from Topps Star Wars cards to the Partridge Family. 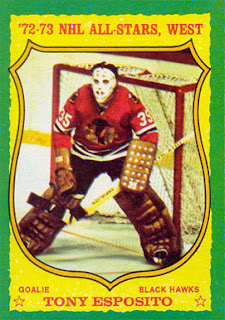 The 1973-74 O-Pee-Chee Hockey came with red and green borders, while the Topps version came in red, green, blue and yellow borders. The All Star cards were action shots inside an NHL like shield.

Second of interest to regular hockey cards were the many food issues from  cereal, candy bars and even slurpees ....

As the venders of the cool-aid like frosty drink - SLURPEE - 7-Eleven stores did several sets that included baseball, football, hockey and even rock stars.

With the modern era of memorabilia cards, the best things that came out of it was honoring some of the all-time great personalities - both in sports and non-sports. My Personal favorite is the Retro Inkredible autograph cards.

I used to collect all the major sports when only one set from each came out during that sport's season. Then it got crazy with multiple sets, by multiple companies with multiple issues.

I liked it when cards were useful for their statistics, box scores, championship games and mud ... 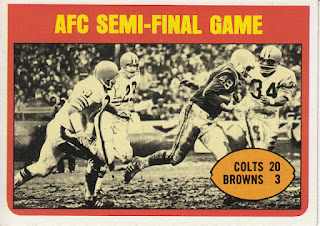 Those things you just don't see anymore these days. I like that the players pictures were posed - usually with a nice open practice field with trees and small fences in the background. Those places were often like the places where we played our games as kids.

These days, my favorites are anything different that I find now. With all the headlines of the attic finds and lost hoards of cards, I had my own little discovery. I have no aspiration that my find will bring me millions of dollars, but the joy of discovery is just as rich.

I recently stopped by a yard sale and found two groups of cards which I purchased for $2.
The first of these are the 1943 Associated Oil - FAMOUS WAR POSTERS. 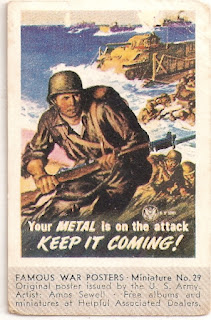 The original set of 50 paper stickers depict popular war posters. The blank backs had adhesive area to stick the miniature posters into an album. These were given away with purchases at your local gas station. Under the artwork of the poster is the military or government issuer and the artist who painted them. 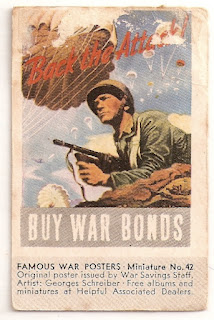 I will let the posters say what they did over 70 years ago ... 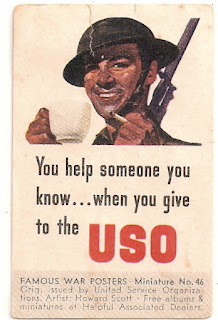 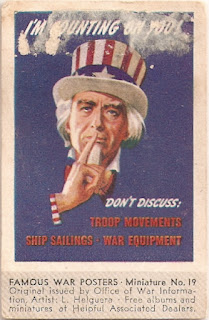 While some of the artists are not household names, others are iconic like these 2 works by NORMAN ROCKWELL - 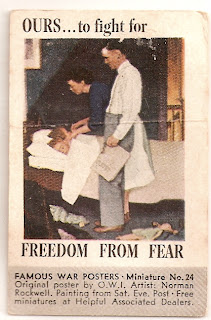 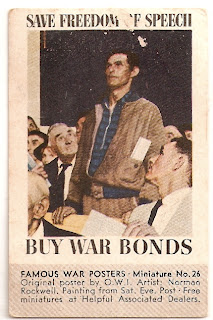 Others are known for their words more than their art ... 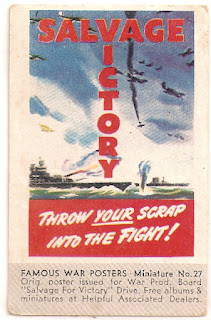 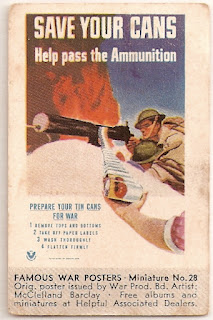 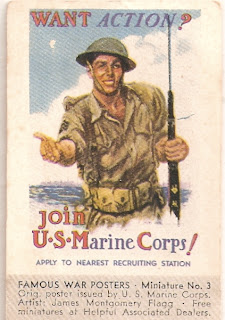