When A Beater is Better Than Nothing ...

Our colleague over at Chronicles of Fuji has posted about cards with character (i.e - cards that would not be found at the overpriced grading companies). To the purist collectors, these misfit cardboard casualties are the diamonds that will never be carved into a jewel.

And so, I selected a few from my collection that have perhaps no resale value - but great historical value.  Founded in 1903, the Newell's Old Boys club of Argentina is still playing in the top league. But where were they over 100 years ago, you ask ?

Right here on this old cigarette card. Damaged almost beyond its use and recognition. Yet, the picture is the simplicity of the game before the huge stadiums, the sponsorship jerseys, and FIFA goal line technology was ever an idea to spoil the purity. 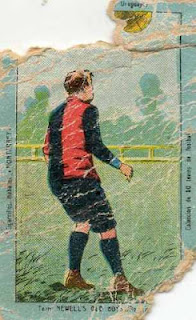 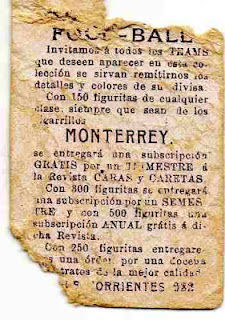 One of the toughest thoughts for me to digest is the cards that were collected, and sorted and owned by kids that lived during World War I and World War II. I think mostly of the children of France, England and Germany who survived the bombing, starvation and firestorms of war. Those are also the places that had some wonderful soccer cards before the wars began.

This guy, Walter Zwickhofer, was someone's favorite player for his club, Schalke 04. The card looks like it went through a few battles, but I like it as all the necessities are still visible and intact. 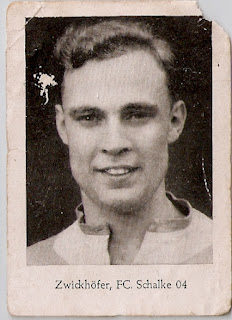 Cuba and Cuban athletes are best known in America for their baseball and their boxing. Several collectors of baseball and boxing have Cuban issued cards as prize possession in their portfolios.
But prior to all the political crap in the 1950's that made Cuba an enemy of the state, they had organized soccer leagues. They even played in the 1938 FIFA World Cup.

This chap, hardly known to the international soccer world, played in Cuba and appeared in this tobacco set. He has two holes in his head. Perhaps from a CIA sniper, or maybe they're just punch holes form a  redemption program. 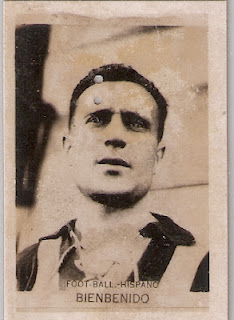 Either way, it is a pretty rare card to find. So condition and character and condolences to these cards and their previous owners. Thank Fuji.

Great post. Your point about cards collected in England, Germany, & France during the two World Wars is very interesting.

I've never put much thought into that specific situation. But when Hurricane Katrina hit New Orleans a few years ago, I wondered how many cards were destroyed in those floods... or just any floods over the years.