From my fellow blogger up in the Great White North (CANADA, eh ?) comes the latest card contest. WAXAHOLIC kicks off the English Premier League Season with THIS (click here for details).

For a country that supposedly doesn't care about collecting soccer cards, a few gems from the 2012 NATIONAL SPORTS COLLECTORS CONVENTION:

The above card is cool for several reasons. One, its a nice design by Upper Deck, who are best known for either plain white borders OR glittery metallic haz-mat cardboard. Two, the cards are surely limited edition with a total of 35 world-wide. Now that may seem small for American collectors, but given that Henry is a fan favorite in no less than 40 other countries, its truly scarce. Three, its an autograph of a FIFA World Cup winner (France 1998).

And four, the photo for the non-autograph version of the card is different. This, in itself, prevents much of the counterfeit signatures that are added to these issues.

The cards were part of a wrapper redemption offer only at the Upper Deck booth at the National Convention.

As Canada has a axe to grind with the USA (just kidding) when it comes to some of our soccer battles, this gem should be a peace offering. Canadian International and MLS All-Star / MVP and soon to be 100 goal scorer - DWAYNE De ROSARIO.

A look at the reverse of the non-signed cards and the Limited Edition seal on each card. 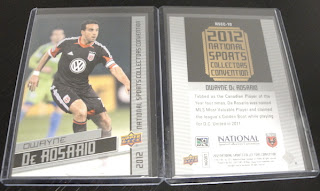 I really like these. I wish Upper Deck would put more effort like this into their soccer products. And if they should need an adviser, call me because I have a thousand ideas.