It is no surprise then that I have not been able to blog as I have wanted to but, that is the new apocalyptic world. The logical jump from last week's comic book find was to be inspired by the tragedy of killing my computers.

What I have enjoyed is watching AMC's WALKING DEAD and  FX's AMERICAN GOTHIC well past the Halloween season. It just so happens my nephew is a budding young artist. And, although I had retired the pencils some time ago, he inspired my to pick them up and draw a little mayhem from my misfortune.

So this is what I do when there is no computer to kill : (please excuse the poor iphone picture as I have no scanner to match my dead computer)

My first sketch is "MAGGIE WACKS A WALKER" - a scene from the prison yard. 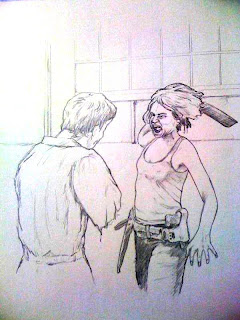 My second is a tribute to all the Southern boys who become skilled in the way of the woods called "DARYL, THE HUNTER". 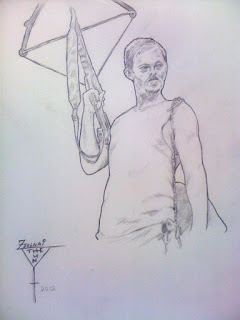 The nice thing about drawing is that when the grid goes down, you can still do it. You just can't put it on line.
Posted by Chuck's Used Cards at 2:40 PM