Sometimes you only have one chance to record history. So when the opportunity arrises, you better be ready.
When Upper Deck produced their first soccer cards in 1993, like many American collectors, I was excited. The Preview set was followed up with the 1994 issue which was released the year that the USA hosted the Men's FIFA World Cup. 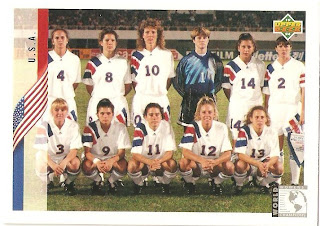 1994 Upper Deck Team card of the World Champion starting XI.
The beginning of a practice of including women's soccer cards as a subset to the men began in 1994. What better subject to include than the reigning Women's World Cup Champions - USA ?
Fast forward almost 20 years to 2013 and the 100th anniversary of US Soccer. At a recent Women's National Team match I met up with one of the World Cup winners - LINDA HAMILTON. 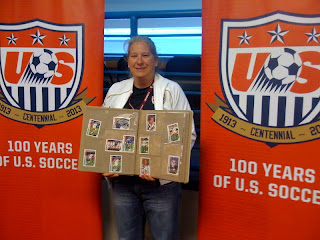 Linda Hamilton with the inaugural set of Women's soccer cards.
Hamilton, know as the "Terminator" for her tough defensive play,  had already stamped her mark on the game by the time the actress with the same name starred in the Terminator movies.
Linda was one of the last cards in the subset that I had not gotten signed. I now only need April  Heinrichs (below) to autograph her card. 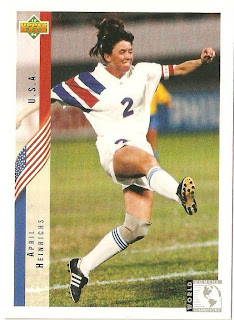 During our conversations she related the story of Upper Deck and the missing card fiasco. A closer examination of the subset of the World Champion U.S. Women, we find that the company released 10 player cards and one team picture card (see top).
Of the starting 11, sadly, Shannon Higgins was omitted. There was no reason other than Upper Deck had only planned for 11 cards in the set. With the inclusion of the team card, one World Cup winner would have to be left out. Stupid.
It is no surprise that within a year Upper Deck lost the rights to print the US Women's cards.  A trend that has contunued as they have lost license after license. The company has waned in quality and service ever since.
I have been fortunate to land 9 of the 10 players autographs from the very first Woman's World Cup winners. Thanks to good penmenship, these cards look great. 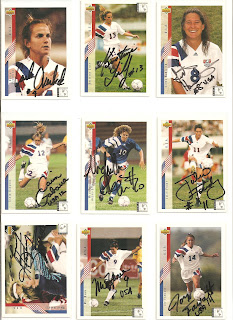 UD may have screwed up by not including Higgins... but I give them props for the set's design. I have a box of this stuff that I hope to bust when I have some free time.

I agree the design was nice for the 1990's. But in the land of "what have you done lately" - Upper Deck is a big Zero in the soccer world.

Panini, Futera and Topps keep UD out of the medal placing. With so many other domestic issues, the California Company does not even qualify for the big show.

I'll take your word for it. I don't really collect soccer cards and haven't purchased any Panini, Futera, or Topps... so I have no basis to judge.