The most redeeming part of blogging is connecting with fellow or new collectors. My latest connection crosses over the Atlantic to Armed Service Member - Noel.  Noel began like many of us collecting baseball cards. Today, he is an avid collector of vintage soccer and a pretty good one at that. His want list is one to drool over. 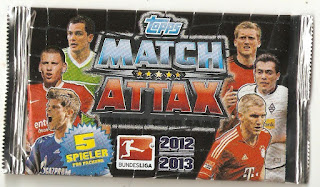 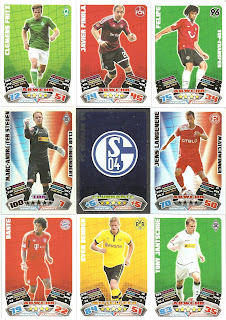 A good assortment of clubs and type cards were in the packs including foil cards of the "100 Club", a "Team Crest" and "Match Winner" (all middle row above). 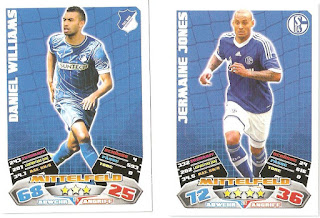 Two Americans - Williams and Jones
I was happy to pull two current U.S. Internationals - Danny Williams (Hoffenheim) and enforcer Jermaine Jones (Schalke 04).
There were 2 packets of Topps stickers (below) which I have not seen since the 1980's football sets. I have yet to open these as I may wait for the sticker album before I rip them. 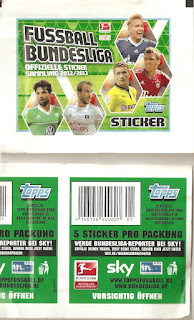 Front and back of the Topps sticker packets.
Lastly, there were 3 packs of the Panini Uefa Champions League cards. I say you just can't go wrong with this set. They are filled with all the big club teams of Europe and there are players on the lesser known clubs whose cards you will only find in this compellation. I got at least two pack wrapper variations -
Iniesta (Barcelona) / Torres (Chelsea) / John (Nordsjaelland)
Pato (AC Milan) / Hart (Man. City) / Ferdinand (Man. Utd.) 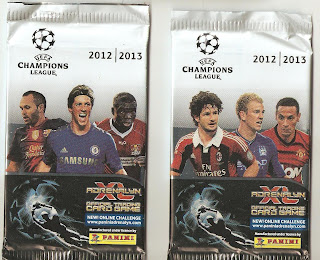 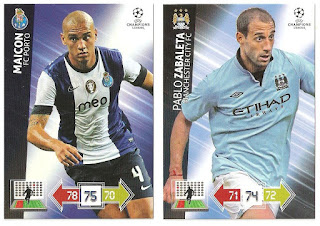 And if I was to wish - the top player to pull in ANY pack these days ... 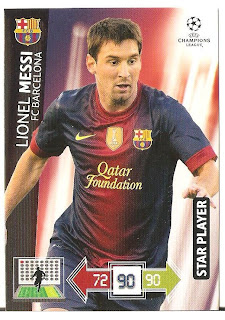 LIONEL MESSI (Barcelona).
Curriosly, he only rates a "90" on his card. Is there a card for "Superman" ? Because there aren't too many players I know that rate higher.
What current players would you rate higher than the above Messi ?  What number rating would you give them ?

while Messi is a top flight goal scorer, is he the best player? I'd say no.
He has too many defensive liabilities.

until I see Messi play in the best league in the world (and he probably never will) he won't be the best player. To be the best, you have to play against the best.

I respect your view. "Best" will always be subject to interpretation. This week you can add Gareth Bale and Zlatan Ibrahimovic to the mix.

Fuji - I'm surprised you have not gotten caught up in Panini fever - every 4 years the challenge to complete the World Cup sticker sets grips the globe. The company makes it easy to complete by offereing any stickers you need for about 20 cents each.

As for Topps soccer - the most economical you can find in the modern card world.

Futera - simply the highest end of cards and the rarest on the planet.