A Bad Day For Goliath ... USA Robbed of Victory !

As good as Germany looked after one game, they looked like a different side against Serbia. Putting aside the Referee that was happy to give out yellow cards like candy at Holloween (more officiating ahead), Germany had the chance to at least tie the game on a Penalty Kick - but for this guy ... 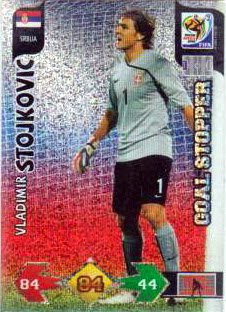 Stojkovic who preserved the win. He stopped Lukas Podolski on what should an automatic goal. This card could not have a better byline - GOAL STOPPER.
But while we are on critizing officials (as happens in sport), the man in the middle from Mali - had some hand (or whistle) in the Americans coming up short. To be fair, the Yanks were aweful in the first half, giving up 2 goals in a lackluster effort.
Whatever half time speech Coach Bob Bradley made, it was enough to inspire this guy ... 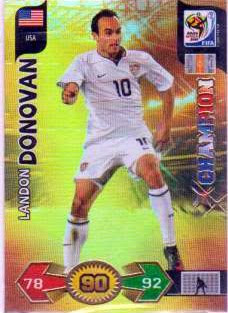 Landon Donovan, who scored on a cranker to get the USA back on track. The coaches' son, Michael Bradley added the equalizer to make the game a nail-biter.
The USA appeared to take the lead on Maurice Edu's tally from Donvan's free kick - only to have the man from Mali blow for an infraction that no one saw. No offside, no foul, nothing except a goal - NOT.
To make the day completely interesting, all the star power of England - Rooney, Gerrard, Terry, Lampard and Co. - could only muster a 0:0 draw with Algeria - deservedly so, as the Africans dominated the passing and ball work that put the group into a log jam.
PANINI OFF LINE GAMES
We've been playing pack wars with our Panini sticker packs: each player picks a country that would give them 3 points, and a team that would be minus 1. All foils count for 1 point. You can also pick a star wild card (player) that would be a 5 point bonus if you get him. Rip and play.
Posted by Chuck's Used Cards at 3:53 PM