USA Proves To Be World Class

When they listed the players that were expected to star in the 2010 World Cup, a few Americans wanted Landon Donovan added to the list. After all, he featured brightly with Everton F.C. earlier in the year and led the Los Angeles Galaxy to the MLS CUP final last season. 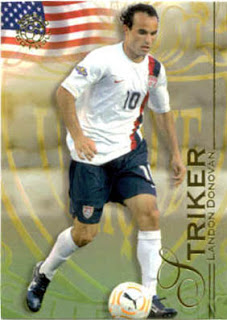 But what many Americans are discovering, and what the rest of the world knows now - the USA can match up with pretty much any soccer power they face.
If you picked Wayne Rooney, Robinho, Cristiano Ronaldo or Didier Drogba to be the top scorer in the Cup, you forgot about one guy. Landon Donovan.
But the victory over Algeria was sweet in so many ways - topping Group C (over England) and doing what so many want to see - score goals. This was no "miracle on grass", but rather the culmination of hard work, a developing soccer league and the emergence of the passion of soccer in the USA. There are more Donovans in America - they just need to be found.
Super Bowls, World Series and NBA Championships are relagated to nights and weekends - while the World Cup could care less when its played ... people are watching it at all hours. So it is a testament to the efforts of America to play the game the rest of the planet does - and beat them at it. No changing the rules, no bastardized version of the game and definately no interference from the NCAA.
Soccer is the world's game - and that is what the USA is winning in so far - The World Cup.
Congratulations USA - on to the round of 16 !
Posted by Chuck's Used Cards at 10:34 AM